JUDY WOODRUFF: The toll in the California wildfires is rising tonight, as search teams go through the charred ruins.

Officials have confirmed now at least 29 deaths in a storm of fires that erupted Sunday night.

Mina Kim of PBS member station KQED has our report.

MINA KIM, KQED: Hour after hour, the flames keep marching across acre after acre of Northern California's wine country. Some 8,000 firefighters spent a fourth day on the fire lines today, fearing forecasts of winds gusting to 45 miles an hour. But they may have caught a break.

BARRY BIERMANN, Fire Chief, Napa County: The good news really is, the wind event that was predicted to blow through the night and today didn't materialize quite the level as predicted. So that gave us a better opportunity to have more containment on our fires.

We still have fire growth on some of our fire in different directions. We have a threat that is continuing in multiple areas, into structures.

MINA KIM: The threat was enough that officials in Napa County have now evacuated the entire town of Calistoga, more than 5,000 people.

MAYOR CHRIS CANNING, Calistoga, California: Please keep us in your thoughts. The Calistogans out there who are scattered around, stay strong.

Karen Ingalls got a call at 4:30 yesterday morning from a neighbor, saying they were all being told to leave. She's already lost her art studio in another city to the fire.

KAREN INGALLS, Calistoga Resident: Sending up lots of prayers, asking for prayers from all my friends and family.

MINA KIM: Donna Hardy came to the shelter with four of her neighbors.

DONNA HARDY, St. Helena Resident: It's depressing. I mean, it is. It's depressing. And lots of times, you will think the worse. But if you're sitting and having a good time, making new friends, it makes you hopeful. 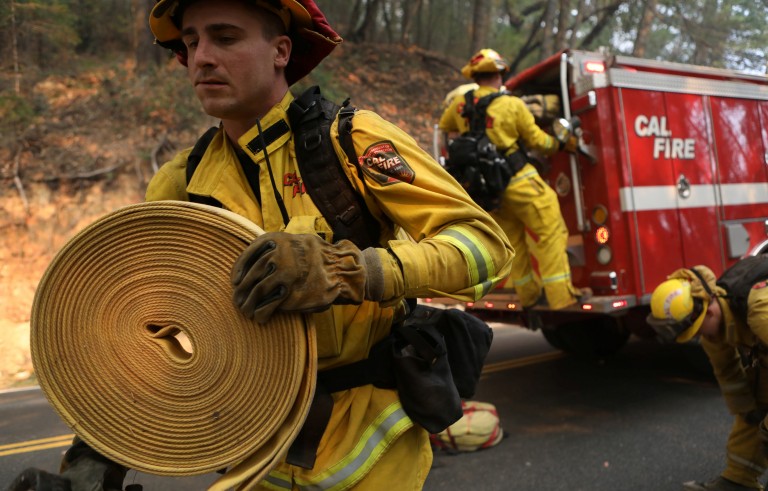 MINA KIM: In Sonoma County, where the Tubbs fire ravaged the city of Santa Rosa, families members are still searching for scores of loved ones. Yesterday, Jessica Tunis last speaking to her mother Sunday night.

ROBERT GIORDANO, Sheriff, Sonoma County: Identification is going to be hard. So far in the recoveries, we have found bodies that were almost completely intact, and we have bodies that were nothing more than ash and bones.

We will do everything in power to locate all of the missing people, and I promise you that we will handle remains with care and get them back returned to their loved ones.

LT. GOV. GAVIN NEWSOM, D-Calif.: The immediacy is addressing the urgency of mitigating loss of life, property damage, addressing the needs of people that are in crisis that have no place to go.

MINA KIM: What caused the spate of fires is still under investigation. The San Jose Mercury News has reported that power lines sparked some of the fires, after they were blown down by gale-force winds.

The reports say Sonoma County emergency dispatchers got calls about lines falling and transformers exploding shortly before the fires broke out Sunday night. The utility PG&E said high winds and vegetation growth — quote — "contributed to some trees, branches and debris impacting our electric lines across the North Bay."

As smoke clouds the sky here, and the fire battle goes on, officials are voicing concern that fires spreading from Sonoma County could merge with ones already burning here in Napa County.

For the PBS NewsHour, I'm Mina Kim in Napa County.