HARI SREENIVASAN: Hundreds of majority Buddhists today protested in Myanmar over suggestions by the government that it might take back the nearly 600,000 minority Muslims who fled the country. The Rohingya, as they're known, are fleeing violence against them by government soldiers which Myanmar says began as reprisals for insurgent attacks. The United Nations calls the military campaign of killings mass rape and village burnings a textbook example of ethnic cleansing. Earlier, I spoke with Farah Kabir of ActionAid a non-governmental organization helping the Rohingya at a refugee camp in the Bangladeshi city of Cox's Bazar. I began by asking Kabir if she's ever seen anything like this.

HARI SREENIVASAN: How big is the need we're talking about?

FARAH KABIR: Oh the need here is huge. I mean in terms of coordination it was quite clear after a couple of days that there was no way any one organization or any even a group of organizations by themselves would take care of this issue. Because when you're trying to provide food water, latrine, then medical, for more than 60, 70 thousand women who were pregnant.

There was no way. So intersectional coordination group was formed and the army has been brought in because in the initial few weeks there was total mayhem. There was chaos. People were giving food, clothes, at different points without any coordination. It was being very totally mismanaged. And then, since then it is much more organized. 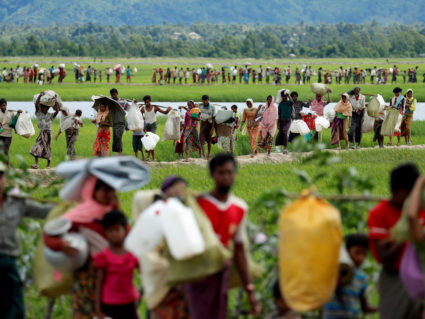 HARI SREENIVASAN: Can you describe who's in these camps, what they've gone through?

FARAH KABIR: A lot of them have been walking for days. I met, the first person I met, she had given birth the day before. She was pregnant, she walked 11 days and she came to Cox's Bazar. There were young boys, with gunshot burns. Then there's of course a lot of women and girls who have been sexually harassed. Raped. Tortured. It is so heart wrenching, it is so difficult to explain to you what it is like here. It's, the scale and the horrific stories that I've been hearing from them.

HARI SREENIVASAN: Do the people that you're talking to every day, do they want to go back to Myanmar?

FARAH KABIR: So when I was speaking to them at different points they are saying, of course I want to go home. That's where my home is. But I found some of them very clearly articulating that I want to go home and be able to live safely because now I feel safe here. But I want to go home, live safely and very strongly they said practice my culture and religion. And that's where the international leadership has to come in. The global leadership, they have to ensure that these people can go home. No one wants to be a refugee. However many packets of food you may give them, and easy access to water, they understand that this is not life. I asked them, Are you working? What did you do when you were there? Some had their own enterprise, a small shop. Some of them had business, they're agricultural farmers and they're just sitting here. Just sitting around living on what we are getting as relief. But this cannot be life.