Hari Sreenivasan: Today Spain saw its biggest public display of opposition to secession by the Catalonia region. Hundreds of thousands of pro-union Catalans turned out on the streets of Barcelona the capital of the breakaway region. Two days ago, Catalonia regional parliament reaffirmed last month's independence referendum and Spain's central government asserted direct control over the region dismissing its leaders and calling for new elections. NewsHour Weekend Special Correspondent Malcolm Brabant has been covering Spain's political crisis joins us from Barcelona.

Malcolm help us figure this out here on the one hand you have Catalonians who are saying we are free and on the other hand you have the central government saying no you're fired and we're going to find some new people to run this.

Malcolm Brabant: Well this demonstration this afternoon really demonstrated just how complex this whole issue is. And there were varying estimates of just how large this crowd was. The organizers were saying that there was something like over a million people here at the local police said it was about 300,000 people. But certainly the main streets of Barcelona they were full of Spanish flags with people demanding union saying that the independence movement by the local government here was completely illegal and they want Spain to exert control over this region and institute Article 155 which means that the Spanish can have direct control. That is supposed to be happening.

Malcolm Brabant: The police force is absolutely critical. It's the local force is the Mossos the national police force the Guardia Civil. And so this is an absolutely sort of crucial area in terms of exerting control because if they allow the Mossos, the local police, to police the streets then that's actually going to help to calm things down. If the Guardia Civil comes then tensions are definitely going to rise. 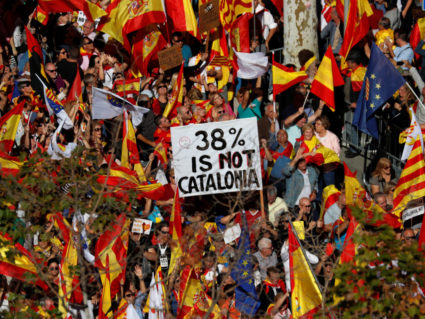 Hari Sreenivasan: What happens to Mr. Puigdemont the guy who led this referendum in the first place.

Malcolm Brabant: Very good question. He's been dismissed and the person who's supposedly running the Catalonian authority now is Spain's deputy prime minister and the big question on everybody's lips here is whether or not Mr. Puigdemont is going to be arrested. Now there was some there was some sort of thought that he might be arrested tomorrow and the local independentistas here who is saying that they're going to throw human chains around places of government local government authority to try to protect the people at the heart of this independence movement. But there are some we were talking as I said to the police union here and they think that perhaps Spain won't necessarily go into arrest Mr. Puigdemont because once again will sort of swell up Independence feeling and create a sort of great antagonism. And so what seems to be happening here is this great sort of sense of limbo. People are waiting for things to happen but nothing seems to be really big going on. You wouldn't think this was a country in the middle of a huge crisis. The atmosphere is really quite sort of OK. Tourists are walking around. Everybody seems to be having fun. No soldiers on the streets or anything like that. And maybe this is Spain's policy and a way to try to make sure that there's no increase in tension which is to do nothing just to let things lie until maybe those elections which they've called on December the 20th.

Hari Sreenivasan: All right. Malcolm Brabant joining us from Barcelona tonight thanks so much.