Judy Woodruff: Republicans in the House of Representatives released their plan for overhauling the U.S. tax code today, the most sweeping proposal of its kind in more than three decades. It was embraced quickly by President Trump and lawmakers say they aim to pass it before the end of the year.

But the bill would bring about big changes, many of which will be the subject of big political fights. Lisa Desjardins reports from Capitol Hill.

Lisa Desjardins: The speaker of the House —

Lisa Desjardins: Serving as cheerleader in chief. Paul Ryan and House Republicans unveiled a sweeping plan to affect nearly every American's taxes and simplify them, they say, down to a postcard-sized form.

Rep. Paul Ryan: With this plan we are making pro-growth reforms so that yes, America can compete with the rest of the world. But we are also making it so that families like these that are here can have more take home pay.

Lisa Desjardins: The 400-page bill is dense. It would reduce most individual income tax rates, and permanently cut the corporate tax rate from 35 percent to 20 percent. The alternative minimum tax for wealthier Americans would end, but so would a slew of tax breaks, including a deduction for most state and local taxes. That could hit the wallets of high-tax states and cities, like New York and New Jersey. To help offset that blow, the GOP bill would still allow deduction of property taxes. Democrat and House Minority Leader Nancy Pelosi slammed the proposal.

Rep. Nancy Pelosi: Republicans have unveiled a bill that raises taxes on millions of middle class families and borrows trillions from the future just to give massive new tax breaks to the wealthy and especially to their friends, corporate America. 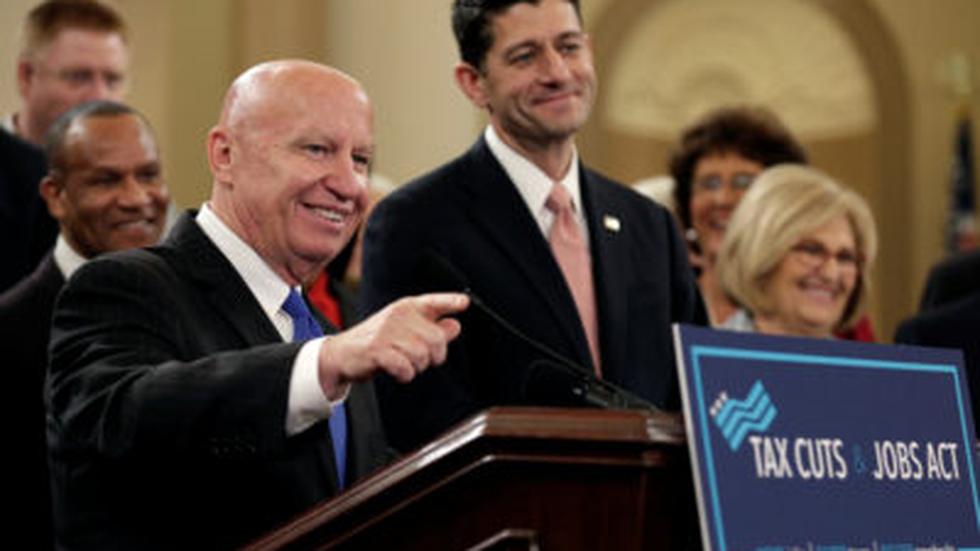 Rep. Paul Ryan: So, what does the bill mean for individuals? Republicans would double the standard deduction for each taxpayer to $12,000. Next, the House GOP would collapse the seven current tax rates to just four tax rates from 12 percent to nearly 40 percent.

So, who would pay what? Looking at married couples, filing jointly. Those earning under $24,000 would pay no taxes due to the new standard deduction. The largest two groups would be couples making up to $90,000, who would face a 12 percent rate, and those making between $90,000 and $260,000, they would be taxed at 25 percent.

The GOP plan would keep the highest rate in the tax code, 39.6 percent, but apply that to fewer people. So, what's this mean? It would be a rate decrease for everyone earning up to a million dollars. And for millionaires, no change. President Trump, meeting with Republicans after lunch, was enthusiastic, saying the bill could get to him by Christmas.

President Donald Trump: We have a great team and it's a team that loves what they are doing, they love the American people, they love this country and they are going to get it done.

Lisa Desjardins: But some other Republicans, like Arizona Senator Jeff Flake, were uncomfortable, especially with how the tax cuts would add to the deficit.

Sen. Jeff Flake: Rate reductions have to be accompanied by real reform. We cannot simply rely on rosy economic assumptions, rosy growth rates to fill in the gap. We've got to make tough decisions.

Lisa Desjardins: Other highly debated features? The plan would phase out the estate tax on large-scale, inherited wealth. Republicans say that tax hits family farms. Others say ending it is a giveaway to the rich.

And there is also a change to one of the biggest deductions of them all — the home mortgage deduction. That would stay for current homeowners, but for anyone buying a new home, there would be a $500,000 limit.

And there are dozens of smaller pieces, including like a the concerns of from some small businesses, that mean however much Republicans want tax cuts. Passage is not yet certain.

Rep. Kevin Mccarthy: For every member, this could really become the most significant bill they ever make a decision in their term in Congress.

Lisa Desjardins: Significant and soon. A full House vote is expected in the next two weeks. At the U.S. Capitol, I'm Lisa Desjardins for the PBS NewsHour.