An American scientist is going to try and prove his belief that the Earth is flat. The man's name is Mike Hughes and he is 61 years old. He is a flat-Earther – someone who believes that the Earth is flat and not round. He has been interested in science for many years and taught himself how to make a rocket. He will get into his rocket on Saturday and fire it hundreds of meters in the air. The rocket cost Mr Hughes $20,000 to make. Hughes said it is powered by steam and can fly at 800 kmh. He told reporters why he made his rocket. He said: "I like to do extraordinary things that no one else can do. No one in the history of mankind has designed, built and launched himself in his own rocket." 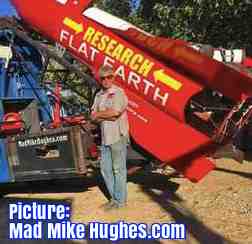 Mr Hughes says when he flies above Earth, he will take photos to prove that the Earth is flat and disc-shaped. He believes that the Earth is just a mass of land surrounded by large walls of ice at the edges. He said: "I don't believe in science." He added that his project will "shut the door on this ball-Earth" idea. He is a little worried about the flight. He said: "It's as scary as hell, but none of us are getting out of this world alive." Hughes said he wants to run for Governor of California after his rocket tests. He hopes his flat-Earth discovery will help him do this. People can see Mr Hughes' flight this weekend live on his website. He said he has put out enough food for his four cats just in case something goes wrong.