William Brangham: Pope Francis arrived in Myanmar today with an appeal to end the crisis affecting the Rohingya Muslims in the majority Buddhist country; 600,000 Rohingya have fled to neighboring Bangladesh since August, fleeing violent attacks by government troops. Jonathan Miller of Independent Television News has this report from Yangon, Myanmar.

Jonathan Miller: The pope's on a mission. In the first apostolic visit to Myanmar ever, Francis aims to sow peace in a land where there's serious discord, a Christian preaching harmony among Buddhists and Muslims. His cardinal here, who met the pope off the plane, has advised his boss to go easy. God's top diplomat is going to be treading on eggshells, because there is a potentially explosive question hanging in the hot, humid air. That question is, will Pope Francis use the R-word, Rohingya, a dirty word here in Buddhist Burma? Deploying it could provoke his hosts, but he knows there's a problem. And he may just choose to name it. Catholics make up just 1 percent of the population of Burma. Rohingya Muslims did comprise 4 percent, except most have now fled, hounded out by a barbarous military campaign backed by Buddhist nationalists of arson, systematic rape and mass murder; 623,000 Rohingya have crossed into neighboring Bangladesh in less than three months. They're friendless and stateless and now stuck in squalid camps, where, despite a deal last week to start sending them back again, most don't want to go. But amid the despair, Pope Francis had wanted to sow hope. 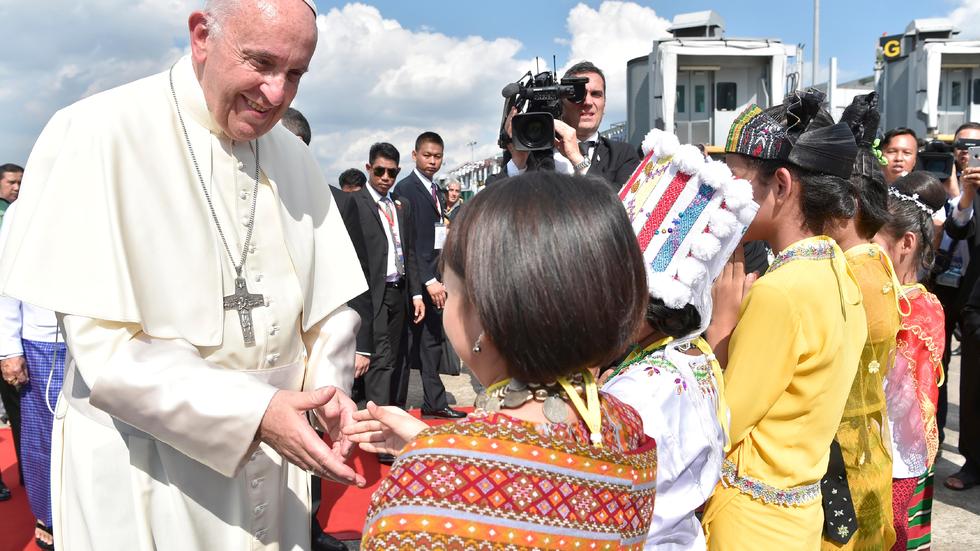 Man (through Interpreter): The Christian Holy Father is going to meet Aung San Suu Kyi. He already knows a lot about us Rohingya. He will do his humanitarian duty. But I do not think they will listen. They have been doing this for a long, long time.

Jonathan Miller: Just two days into what the U.N., the U.S. and the U.K. have all said looks like an ethnic cleansing campaign, the pope stood above St. Peter's Square and prayed for what he called "our persecuted Rohingya brothers and sisters." We don't know whether, in St. Mary's cathedral in Yangon today, he used that R-word again when he met this man, general Min Aung Hlaing, Myanmar's military chief, the most powerful man in the country and the shadowy architect of the cleansing campaign. His armed forces have the blessing of Buddhist leaders, like Sitagu Sayadaw, who three weeks ago preached a sermon to officers which appeared to suggest that killing Rohingya was justified, on the grounds that, as non-Buddhists, they're not really human. The chauvinist interpretation of scripture, including by this monk, Ashin Wirathu, has led to the rapid rise of a xenophobic Buddhist nationalism, now the state creed here. It's into this cauldron that the peace and love pope has dived. Can he make a difference for the unwanted and now banished Rohingya? Well, tomorrow, he will meet Myanmar's de facto political leader, Aung San Suu Kyi.