Woman: (Through interpreter) Kim Jong-un declared with pride that now we have finally realized the great historic cause of completing the state nuclear force, the cause of building rocket power.

William Brangham: The broadcast showed an image of Kim signing the order to launch. The new missile, dubbed the Hwasong-15, flew farther than any North Korean rocket had before. It soared to an altitude of nearly 2,800 miles, then dove into the Sea of Japan, within what's known as Japan's Economic Exclusion Zone. That means, if shot on a flatter trajectory, the missile could have flown some 8,000 miles, reaching Washington, D.C. It remains unclear if the North Koreans have figured out how to either fit a nuclear warhead onto the missile or created one that could survive reentry into Earth's atmosphere. But on the streets of the capital, Pyongyang, North Koreans played their dutiful part, cheering the announcement.

Man:(through interpreter) The missile launch has brought us another victory. Our success has once more cracked down on the U.S., which is unable to see its coming death.

William Brangham: South Korea responded with its own drill, firing off missiles into the sea. And President Moon Jae-in spoke with President Trump by phone. His spokesman said he'd warned the situation could get out of control.

William Brangham: Mr. Trump also spoke by phone with Chinese President Xi Jinping. Afterward, Mr. Trump tweeted that new sanctions on the North would be forthcoming. The Chinese Foreign Ministry said Xi is gravely concerned. This afternoon, the U.N. Security Council held another emergency meeting on the North's continued defiance of U.N. resolutions. So what does this latest launch mean for U.S. diplomacy? For that, we turn to Joel Wit. He was part of the team that negotiated a nuclear agreement with North Korea during the Clinton administration. He's now a senior fellow at the U.S.-Korea Institute at Johns Hopkins University and founder of 38 North, a Web site that focuses on Korea. So, Joel Wit, how concerned should we be about this latest launch?

Joel Wit: Well, of course we should be concerned because North Korea is obviously moving to the development of a missile that can reach the United States, but this is not new. This is the third test they have conducted, and we have known for some time that they are moving down this road. So it just reconfirms what's going on. And it's, of course, very dangerous. 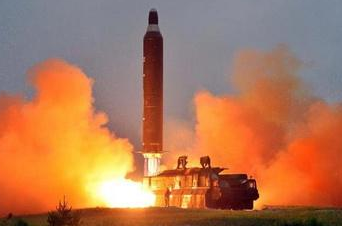 William Brangham: The North Koreans argue that they are now a fully-formed nuclear power. Is that true? And, if so, what does that do to our diplomacy?

Joel Wit: Well, the reality is North Korea has had nuclear weapons for some time now, and they have also been able to put them on missiles that can reach other countries in the region, like our allies South Korea and Japan. And so now they are expanding their reach by developing missiles that can reach the United States. So, they have been a nuclear weapons state for some time now. They have been a threat to other countries in the region, and now they're going to be a threat to the United States.

William Brangham: Does that provide an opportunity, though, to open up talks of some sort that might be productive?

Joel Wit: Well, that's a very good question, and it sounds counter intuitive, but, in fact, North Korean policy is based on creating a nuclear shield so they can develop their economy. So if the North Koreans now feel that they have developed enough of a nuclear shield, they may want to pivot to better relations with the outside world in order to somehow develop their economy. And that gives us leverage over them to try to get them to move towards stopping their programs, reducing them and, in the very long term, getting rid of their nuclear programs, in return for gradually building economic and other ties with them. So it's quite possible they have reached the pivot point now, although we will never know unless we really sit down and discuss this.

William Brangham: If you were talking to the president of the United States and his national security team, what would you counsel them to do today?

Joel Wit: What I would say is that, sure, you know, we should be imposing more sanctions on North Korea because of their bad behavior, and, sure, we need to prepare for the possibility that there will be some military confrontation. But, at the same time, we need to seriously explore the possibility of a peaceful way out of this confrontation, and that means a serious dialogue with North Korea face to face. We need to sit down with them and discuss issues of mutual concern. And, of course, one of those will be North Korea's nuclear weapons program.

William Brangham: How likely do you think those talks are?

Joel Wit: Well, right now — usually, when I talk to people, I lay out three scenarios. One is that there will be a military conflict on the peninsula, whether because of miscalculation or deliberate. Second is that the United States will back down, that President Trump and the administration will have to back down from their threats. And third is there will be a diplomatic track that will be pursued. And I would say the chances of diplomacy right now are anywhere from 10 to 20 percent and the other two are much higher.