Judy Woodruff: Leaders of Arab and Muslim countries around the globe are warning tonight of disaster, while Israel's leaders are hailing President Trump's dramatic policy shift on Jerusalem. John Yang begins our coverage.

President Donald Trump: I have determined that it is time to officially recognize Jerusalem as the capital of Israel. This is nothing more or less than a recognition of reality. It is also the right thing to do. It's something that has to be done.

John Yang: He cited a 1995 law that called for recognizing Jerusalem as the capital, and moving the U.S. Embassy from Tel Aviv. But while Mr. Trump announced today his intent to move the embassy, like previous presidents, he signed a waiver delaying that. Israeli Prime Minister Benjamin Netanyahu quickly praised the decision.

Prime Minister Benjamin Netanyahu: President Trump, thank you for today's historic decision to recognize Jerusalem as Israel's capital. The Jewish people and the Jewish state will be forever grateful.

John Yang: In Jerusalem, many Israelis celebrated the news.

Man: Trump's announcement is — it's going to be very — it is very important, and I think is a big celebration for Israel and especially for us, the Jerusalemites.

John Yang: And Palestinians condemned it.

Fahed Al-rishik (through Interpreter): This topic assures how biased President Trump is with the state of Israel and how much he doesn't care about the Palestinians and the situation in the Middle East.

President Mahmoud Abbas (through Interpreter): These denounced and rejected measures create deliberate constraints to all the efforts toward realizing peace and reflect the United States' withdrawal from practicing its role as a peace mediator. 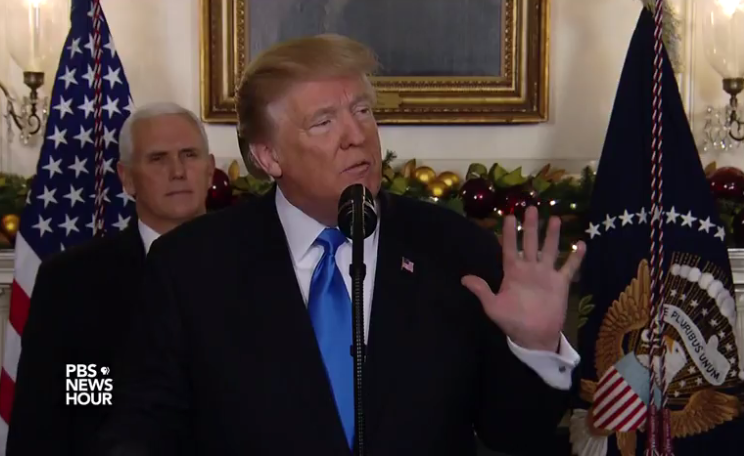 John Yang: In Gaza, militant leaders from the Palestinian group Hamas called it a flagrant aggression that opened the gates of hell. Across the Middle East, key U.S. allies, including Turkish President Recep Tayyip Erdogan and Jordan's King Abdullah, warned of dire consequences.

President Recep Tayyip Erdogan (through Interpreter): Taking any wrong step regarding Jerusalem's status will cause public unrest in the Muslim world.

John Yang: Egypt also blasted the decision, as did European leaders and the secretary-general of the United Nations.

Antonio Guterres: Jerusalem is a final status issue that must be resolved through direct negotiations between the two parties.

John Yang: Any change in the status of Jerusalem is fraught with risk. It's been at the heart of the Israeli-Arab conflict ever since the U.N. drew the boundaries for the Jewish state in 1947. The city is sacred to Jews, Muslims and Christians. Palestinians want East Jerusalem as the capital of a future state. Much of Israel's government resides in West Jerusalem, and many Israelis claim an undivided Jerusalem as their capital. The president didn't refer to an undivided Jerusalem today, and he was at pains to avoid thorny details that have long plagued peace efforts.

President Donald Trump: We are not taking a position of any final status issues, including the specific boundaries of the Israeli sovereignty in Jerusalem or the resolution of contested borders. Those questions are up to the parties involved.

President Donald Trump: We will move the American Embassy to the eternal capital of the Jewish people, Jerusalem.

John Yang: He's maintained that position since taking office, and also suggested earlier this year that he's not wedded to U.S. support for a two-state solution.

John Yang: But today's decision makes the road map to a resolution for the Middle East's longest-standing conflict much more complicated. For the PBS NewsHour, I'm John Yang.

Judy Woodruff: We will hear from both Israeli and Palestinian officials right after the news summary.