Centipedes are the kind of creatures that are not to be messed with. Their venom packs a serious punch and can cause rapid paralysis and death in insects and small animals. They have even been known to kill people with their highly venomous sting. Scientists have now discovered a deadly toxin in centipede venom that can shut down the hearts of animals that are 15 times bigger than them. The scientists isolated a toxin in the Chinese red-headed centipede. This beast can grow to roughly eight inches in length. The toxin in its venom blocks potassium from moving in and out of cells. This blocking of potassium prevents the brain from sending signals to the heart to beat, thus causing a rapid death. 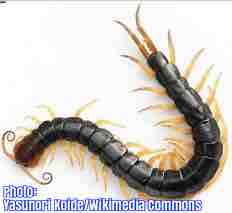 The venom is rarely fatal for humans, but it can cause agonizing pain and swelling for up to two weeks. The scientists have called it SSM Spooky Toxin. Researcher Shilong Yang, an expert in toxins at China's Kunming Institute of Zoology, explained: "The "centipede's venom has evolved to simultaneously disrupt cardiovascular, respiratory, muscular and nervous systems. This molecular strategy has not been found in other venomous animals." Despite their name (centi is "hundred" in Latin and pedis is "foot"), centipedes do not have 100 legs. They have a varying number of legs, ranging from 30 to 354. Centipedes always have an odd number of pairs of legs. This means no centipede has exactly 100 legs.