There have been crazy scenes in supermarkets across France. Shoppers have been fighting and punching each other to buy jars of the hazelnut spread Nutella. A nationwide chain of supermarkets cut the price of it by 70 per cent. The supermarket Intermarché launched a promotion on 950-gram jars of the sweet treat on January 25. The cost was slashed from 4.50 Euro to 1.41 Euro. Long queues formed outside stores, but shoppers lost their cool in the aisles. A witness at one store described the chaos. She told French media: "They fought like animals. A woman had her hair pulled, an elderly lady had a cardboard box put on her head, and another woman had a bloody hand. It was terrible." 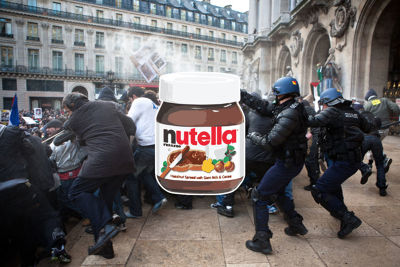 The maker of Nutella is an Italian company called Ferrero. It said it had nothing to do with the discount. It tweeted: "The decision for the promotion was taken only by Intermarché." It added: "We condemn the consequences of this operation, which created confusion and disappointment among customers." The supermarket has not commented on this story. An employee said: "It was crazy. It seemed like it was the first day of sales. People just rushed in, shoving everyone and breaking things." He added: "It was like a riot. We nearly called the police." A tweeter explained how important Nutella is in France. She said: "French people eat it by the spoonful. I had it on toast for breakfast as a child."