It almost seems too hard to believe, but there is now a banana that has an edible peel. Most people would never think of eating the peel of a banana. However, banana farmers in Japan have created a special technique for growing bananas with a peel we can eat. The new banana-growing method is called the "freeze-thaw awakening" technique. Farmers in Okayama, in the west of Japan, keep their banana trees at a freezing cold temperature of -60° Celsius. The farmers then replant the trees in 27ºC temperatures. The huge change in temperature makes the tree suddenly grow too quickly for the peel to fully mature. This makes the skin thin, soft and sweet enough to eat. 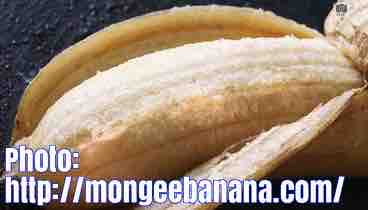 The new variety of banana is called the "Mongee". Farmers are now selling it in small bunches of 10 bananas. They are not cheap. One Mongee banana costs yen 650 (about six dollars). The farmers have not grown a lot of Mongee bananas, so the price is high. They want to grow more so they can sell them all over the world. This means the price will come down. Bananas are the most popular fruit in Japan. Similar to other countries, Japan imports most of its bananas. About 99% of bananas in Japanese stores are imported. The Mongee could mean Japanese people eat more home-grown bananas. The Mongee banana skin is sweet and contains nutrients such as vitamin B6 and magnesium.