Judy Woodruff: And now we step back for a historical perspective on addresses to the nation. The State of the Union is an uninterrupted opportunity for President Trump to outline his legislative agenda and his priorities. To help us understand the potential significance of tonight, I am joined by presidential historian Michael Beschloss. Michael Beschloss, welcome back to the program. It's good to see you.

Judy Woodruff: So, a lot of eyes on the president tonight. What sort of opportunity does the State of the Union present?

Michael Beschloss: Well, it is most suited if you have got a president who has got something new, wants to tell the country, I want to move in a different direction. For instance, 1941, in January, Franklin Roosevelt talked about the four freedoms that he wanted to see around the world. What that told Americans was, this is a president who really is a lot more likely to want to get involved in World War II against Hitler than we expected. Lyndon Johnson in '64 and '65 said, I want a war on poverty. I want to go for civil rights and voting rights. George W. Bush in 2002 talked about the axis of evil, what we should do to worry about North Korea, Iran, Iraq. Look how much that has affected world history ever since then. That's the best opportunity for a president in this situation. 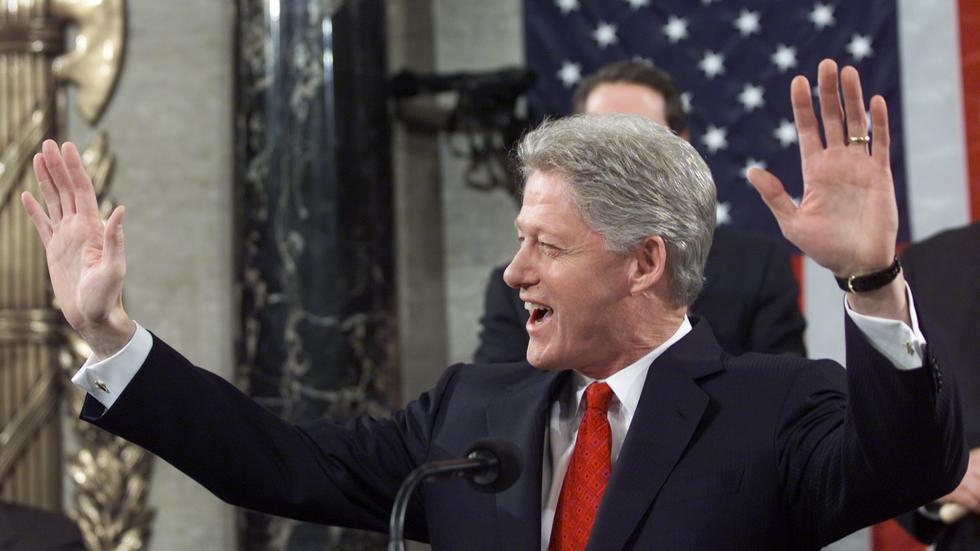 Judy Woodruff: So, Michael, do the words a president speaks at a State of the Union or at other important events, do they actually have the ability to move legislation, to get people behind him for whatever he wants to get done?

Michael Beschloss: If they give a great speech. For instance, Lyndon Johnson in 1964, he really felt in his heart about poverty. He helped to tell Americans, this is a disgrace that, in this prosperous country, there are so many people who are suffering. That got Americans to lean on their members of Congress to move.

Judy Woodruff: Well, you also have — it's part of what we're all talking about tonight — you have a nontraditional president in Donald Trump…

Judy Woodruff: … but in a very traditional setting, making the speech, State of the Union, standing before the Congress. Is there any historical precedent?

Michael Beschloss: Well, the interesting thing, there is not, and especially because you have got a president who basically says — is proud of the fact, much as it grieves me to say this, Judy, he says he's not very interested in history and doesn't read books. So, this is very different from most presidents who study how other presidents have used this occasion. And so if you think, is this someone who is going to write a speech, stick to it, and not get off the teleprompter, he probably will get off the teleprompter, and that could be the news of the night.

Judy Woodruff: It's interesting, because, as we know, Michael, there is so much focus right now on the president — how the president uses social media, what he says in his Tweets…

Judy Woodruff: … and in his — especially — and in his other off-the-cuff remarks. So, when you weigh a speech vs. the off the cuff, you really are looking at a different way of getting a message out.

Michael Beschloss: That's right. And this is a reality TV star, and he knows that people are usually more interested in what seems to be spontaneous than what is on script. And also he famously doesn't have a lot of self-discipline. He gave a somewhat unifying, rather polished speech off the teleprompter to Congress last year, was widely praised for it and, as you remember, very quickly after that did a tweet about Barack Obama supposedly bugging Trump Tower that sort of stamped on his message.

Judy Woodruff: And, finally, Michael, I guess picking up on that, but this is a moment when there is this investigative cloud hanging over the president. Is this a moment to shake that loose, or how do people see a president at a moment like this?

Michael Beschloss: Well, Donald Trump has got two historical choices. In 1974, Richard Nixon went before Congress and said, time to end the Watergate investigation. He said, one year of Watergate is enough. Twenty years ago, in 1998, Bill Clinton, just after the Monica Lewinsky episode began, went before Congress, gives this long speech, about 90 minutes. People kept on waiting to hear what he was going to say about the scandal. He didn't say a word. And, as a result, Clinton's public approval rating, as measured by the Gallup poll, went up 10 points from 59 to 69. So we will see which course the president chooses.

Judy Woodruff: And we're hearing tonight the president doesn't plan to mention the Russia investigation. So, we will be watching. Michael Beschloss, thank you very much.

Michael Beschloss: Thank you so much, Judy.