MEGAN THOMPSON: While the release of the GOP House Intelligence Committee memo was the focus in Washington last week there are other significant political and economic issues worth paying attention to. Joining me from Santa Barbara, California to discuss them is NewsHour Weekend Special Correspondent Jeff Greenfield. Jeff, thank you as always for being here. So you have said that watching this Russia story unfold is to you like watching the film Groundhog Day where the main character keeps reliving the same day over and over again. Why?

JEFF GREENFIELD: Because for nine months it's been one central reality. And that is where the power lies with the Republicans. We talked a lot about Watergate. Well imagine during Watergate the Republicans ran the House and the Senate which meant they ran the investigations. Imagine the Republican party was united behind President Nixon and was prepared to say whoever is accusing him of misconduct or the Chris campaign is even guilty of treason which is a word we've heard. And imagine an alternate cable news network that was hammering that message home. "Don't believe the mainstream media." That is the central message. Nine months ago, six months ago and today whatever they tell you, whatever Mueller might find out don't believe it. And as long as the Republicans retain control of the Congress I think Trump is essentially invulnerable.

MEGAN THOMPSON: So are we at all paying attention to Russia this week? You say there was a big economic story that we may have missed. Tell us about it. 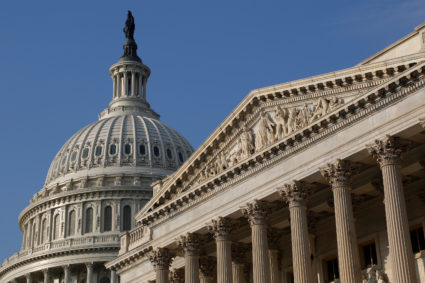 JEFF GREENFIELD: Well it's like Trump is this large celestial object with all this gravitational pull toward him. But meanwhile the Treasury Department has told us it wants about $440 billion more in borrowing power to cover next year's deficit which could be somewhere between three quarters of a trillion and a trillion dollars. Now I'm old enough to remember when that issue the explosion of the debt deficit spending was a big deal especially among Republicans who warned that we were spending ourselves into bankruptcy and now it's kind of like Emily Litella as their spokesperson – remember from Saturday Night Live? "Never mind!" And that's part of what I think has gone by the boards with this obsession with Russia and the memo.

MEGAN THOMPSON: You say there is also a public health story that's not getting enough attention.

JEFF GREENFIELD: This is one which I think should set alarm bells off. The Centers for Disease Control has operations in more than 35 countries trying to work with men with nations to ward off possible epidemics. They're running out of money. And if the money isn't given to them they're going to have to start rolling back all of these efforts including like in the Congo – eighth Ebola outbreak. China where there's a bird flu problem and I'm just thinking that you know I would hate to be down the road in a few years with people asking the media why didn't you tell us about what was going on with our economic health? How come we didn't know about the possibility of pandemics breaking out because we didn't have the resources to stop them? And it's one of the consequences I think of this focus. I understand the Russia story is very important. But there are other stories and we really can't be in a position where the media is obsessed with just one.

MEGAN THOMPSON: All right. Jeff Greenfield, great to talk to you as always. Thank you.