Parents of a Tokyo elementary school are up in arms at being asked to pay $730 for their child's school uniform. A public elementary school in Tokyo's upmarket Ginza district has decided to adopt new school uniforms designed by the luxury Italian designer Armani. The bespoke uniforms, which include a hat and bag, are priced at over 80,000 yen ($730) each. Parents are angry at the school's decision and are protesting at what they view as the exorbitant price for a uniform of an eight-year-old child. The school said it wanted a designer uniform that represented the rich area of Ginza. School officials visited top department stores and decided to ask the fashion brand Armani to design the uniform. 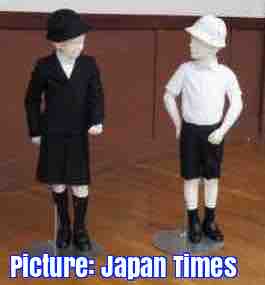 The expensive uniform has created such a fuss that it has been discussed in Japan's parliament. One lawmaker said that since the school is public and not private, "a certain price range needs to be considered". Finance Minister Taro Aso said: "Clearly it's expensive. It would be tough if a student could not afford to pay for it." Japan's education minister said steps would be taken to ensure the financial burden placed on parents for uniforms, "would not be excessive". Twitter users said young children are not interested in designer clothes. The school principal said: "With humility, I take the criticism that the explanation has been insufficient and not well-timed. I will go on explaining carefully to those concerned."