JUDY WOODRUFF: White House Communications Director Hope Hicks made the surprising announcement late today that she will leave the Trump administration in the coming weeks. The 29-year-old is the latest of well over half-a-dozen top advisers to leave during President Trump's 13 months in office and she is the president's longest-serving aide. The news comes just one day after Hicks' testified for hours before the House Intelligence Committee as part of its ongoing investigation into Russian interference in the 2016 presidential election. Ashley Parker is a White House reporter for The Washington Post. Ashley, thank you for joining us. So, what is known about why Hope Hicks is doing this?

ASHLEY PARKER, The Washington Post: So, I first should underscore that this is an incredibly stunning development. There was a sense that even in a chaotic and tumultuous White House, if there was one person who would be with President Trump through the end of his, or potentially two terms, it would be Hope Hicks. Our understanding is that she did actually make this decision before esterday's testimony on Capitol Hill. And she has told people that she basically wants to spend -- be closer to home, to her family in Connecticut, that three years focused solely on one thing and working in this incredibly high-pressure and high-intensity environment just takes a toll on anyone. And she realized it was her time and moment to move on. I do have to say, this comes as she, herself, was under a lot of personal stress. There wasn't just that testimony. She had been romantically linked to Staff Secretary Rob Porter, who was forced out of the White House amid allegations of domestic abuse. And, more broadly, right now, he Mueller probe is intensifying, and it feels like it's creeping closer to the West Wing and the Oval Office. Hope Hicks is someone who literally sits outside the Oval Office, and is intimately involved in everything. If there is someone who would sort of know every little bit and piece of what is said and done in that White House, it is Hope Hicks.

JUDY WOODRUFF: She sits right next to the president, has the closest office to his. And, Ashley, there was reporting yesterday after her testimony that she had told the committee members that she did sometimes tell what she called white lies for the president. There's been a lot of speculation about that and whether that had some effect on this. 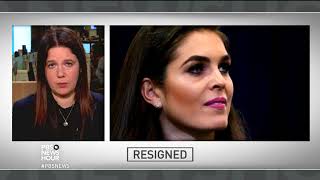 ASHLEY PARKER: That's right. And, again, she has told people she had made the -- she told some people about this decision before her testimony, where she mentioned the white lies, and she claims that the Russia investigation in general has nothing to do with this. But you have to recognize that, again, more than anyone in this White House, Hope is in an incredibly precarious position because she was often called upon, by her own admission, to sort of fib for the president, and, you know, maybe engage in some misdirection. And there's no crime, as we unfortunately all know, with lying to the media. But you cannot lie under oath to congressional investigators and you certainly cannot lie when you speak to a special counsel.

JUDY WOODRUFF: And just quickly, Ashley, you pointed out she's been at the president's side for a long time. We said longest-serving aide. And this does follow a number of other top advisers to the president who have left just in the first year.

ASHLEY PARKER: That's another incredibly important point. And this is a president who runs the White House like a family business, and he likes to surround himself with familiar faces and people he's comfortable with. And with Hope Hicks leaving, it leaves him increasingly isolated. All these familiar faces, people he's known forever, are gone.

JUDY WOODRUFF: Ashley Parker with The Washington Post, thanks very much.