Brazil's former President Luiz Inacio Lula da Silva is in jail after surrendering to authorities on Saturday night. He was sentenced to spend 12 years behind bars after being found guilty of money laundering and corruption. It is a huge fall from grace for the still-popular ex-leader. Mr da Silva still has massive support and just hours before turning himself in to the police, his supporters were trying to stop him from going into custody. Hundreds of supporters from a metal workers' union blocked a gate where a car carrying da Silva was trying to leave to meet police officers. It was only with the help of his bodyguards that he could get through the crowds. This meant possible clashes with armed police were avoided. 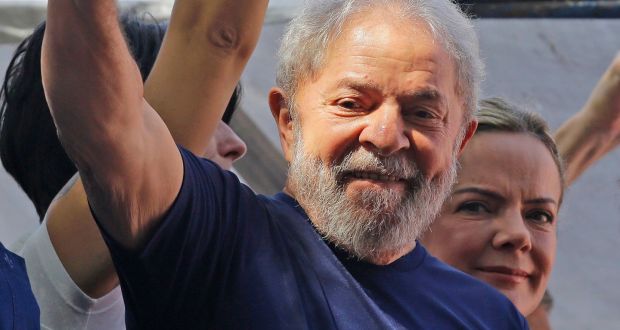 Mr da Silva is affectionately known as Lula by his supporters. He was born in poverty and rose through the ranks of workers' unions to become leader of South America's largest country. He ran for the presidency several times before being elected to office in 2002. He governed from 2003 to 2010. During his two administrations, he initiated several social welfare programs and resurrected the economy. This helped tens of millions out of extreme poverty, which made him very popular. Former U.S. President Barack Obama once called da Silva, "the most popular politician on Earth". When he left office, his approval rating was an impressive 83 per cent. He hopes to overturn his conviction and run for president again.