JUDY WOODRUFF: We turn now to the group of migrants seeking political asylum in the U.S. This is the so-called caravan from Central America. John Yang has our update.

JOHN YANG: Judy, tonight, more than 100 Central American migrants remain steps from the U.S. border in Tijuana, Mexico. Some of them celebrated when told that, overnight, U.S. officials admitted eight of them to an immigration checkpoint to apply for asylum, spurring hopes that more will be allowed to follow. Separately, the Justice Department charged 11 people believed to have been part of the group with entering the country illegally. For the latest, we're joined by NPR's Carrie Kahn, who is back in Mexico City after leaving Tijuana this morning. Carrie, thanks for joining us. What's the latest on this group of people, and how many are being allowed into the United States to apply for asylum?

CARRIE KAHN, NPR: As you said, there were eight last night. And at about noon local time in Tijuana, they let in about six more. So it's a trickle of asylum claimants that they're allowing into the port of entry right there.

JOHN YANG: So, Carrie, what are the conditions you saw in Tijuana before you left this morning? 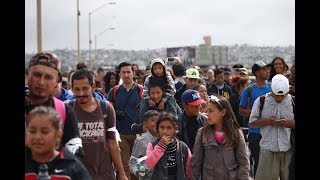 CARRIE KAHN: So, you have the 140-some from the caravan, migrants, mothers, children, setting up, laying on blanks on the concrete with tarps and tents. But what also happened was, word got out that the Central Americans were there, and these migrants also started showing up, and they were very upset, because they had been in Tijuana for more than a week waiting. They said they had an informal list, so that it would go in order who would be able to walk into the U.S. facility asked for asylum. I said, how many people are on this list? And the man told me there were 300, twice as many of the Central Americans. And they began starting to form tents and tarps there. So you have this huge encampment of 450 some claimants that are waiting to get into the U.S. to ask for political asylum. It is an incredibly dire scene there at the border. One woman that I spoke to, her 15-year-old daughter was kidnapped by gang members and held for days and was gang-raped. And as soon as she was able to secure her release, she fled her home with that daughter and another daughter. Another woman that I have talked to, she showed me scars on her child's head that she said was beaten consciously in retaliation for her husband's actions with gang members. It's just some horrific violence that we hear about.

JOHN YANG: And this trickle, as you put it, that were being allowed in to begin the process of asking for asylum in the United States, what's the process that they face now?

CARRIE KAHN: The first point that they have to do is, they have to tell -- the first immigration officer that they see, they have to tell them that they have a credible fear. And it's up to that officer to decide whether he believes that they have a credible fear. And if they do, then they begin the asylum process. That could be being in detention for an indeterminate amount of time, or it's up to the officers and the administration at the time whether they want to allow them to be released. They can be released to family member or a sponsor, sometimes with a monitoring apparatus around their ankle, or they will be kept in detention throughout the entire process. That's another discretion that we will have to see what the Trump administration is doing with these particular asylum claimants.

JOHN YANG: And, of course, President Trump had been saying that no one would be allowed in. They are allowing this trickle, as you say. And, on the other hand, they have arrested 11 and charged them with entering the country illegally. What message do you think the administration is sending to this group?

CARRIE KAHN: They have singled out these 11, and they're definitely trying to send a message back to the members of the caravan and migrants trying to cross illegally that they will be prosecuted under the full extent of the law.

JOHN YANG: Carrie Kahn of NPR, thanks so much for joining us.