Hari Sreenivasan: This past week was May Day, when many countries pause to honor workers. This year, photographers from Agence France-Presse took a look at those around the world whose jobs have become increasingly rare thanks to advances in technology. The series is called "The Disappearing Jobs of Yesterday."

Eric Badarat: The idea was to show the jobs that have been part of our lives for decades and are slowly disappearing around the world. 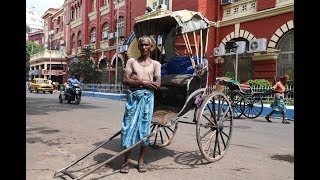 Eric Badarat: The first idea originally was to find jobs that are disappearing because of the Internet revolution, because of the digital revolution. But then, there were so many ideas and so many nice portraits coming that we kind of broadened a little bit the idea and maybe just simply as disappearing jobs.

Reporter: A.F.P.'s photographers captured a wide range of jobs, from one of the last gas lamp lighters in London to a bookbinder in Bulgaria, a key maker on the streets of Beijing and a sewing machine repairman in Belgrade. The project even highlighted photographers themselves.

Eric Badarat: The, you know, the film photography, the street portrait photographers on touristy places and everything, iphone and selfies are killing those jobs. So, it was kind of an immediate reflex for photographers to talk about photographers.

Reporter: And in Rio, Brazil, there's at least one video rental store remaining.

Eric Badarat: It's true that the idea that DVD or video rental is totally disappearing. It was a big thing in the '90s or the '80s, and now totally gone. So, when you have a frame that is consistent everywhere in the world, you can show a moment in life everywhere the same way, and people, you know, will buy that a lot.
They are very interested.