AMNA NAWAZ: Before we go tonight, we remember the victims of the school shooting in SantaFe, Texas, in which 10 people were killed, and 13 others injured.

They were sons and daughters, siblings, parents, spouses and grandparents and, of course, students and teachers.

These are the 10 people who died in Friday's shooting and what friends and family have said about them.

His family planned to have a poolside birthday party for him this past weekend.

His half-brother, Nick Black, said: "My brother loved to play Minecraft on Xbox, play Pokemon GO on his cell phone, and loved art."

Jared was in the art room when the shooting started. 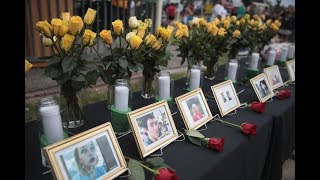 She, too, was in the art room at the time of the attack.

A childhood friend said "She stood up to bullies for me when we were little."

Christian Riley Garcia, 15 years old, had "grown up in the church," a Texas pastor who baptized him wrote on Facebook.

Garcia was waiting for his new home to be built when he was killed.

Fifteen-year-old Aaron Kyle McLeod had a reputation for finding humor even in dark situations "He was never one to be a sad or down person.

He always had to joke or laugh about things,"

a close friend said about him.

Her relatives said she would have wanted faculty and students "to remember to keep their hearts open,

to discuss their feelings with family members, friends, and counselors in order to successfully conquer this tragedy."

Sabika Sheikh was a 17-year-old exchange student from Pakistan who was planning to return home within weeks.

Her father, Abdul Aziz Sheikh, said she wanted to be a diplomat to represent her country.

Secretary of State Mike Pompeo said she was helping to build ties between the U.S. and Pakistan.

Angelique Ramirez, 15 years old, was a member of the Santa Fe Church's youth ministry and is remembered by a pastor as "a sweet young lady with her own style."

Christopher Stone, 17, was one of several students who blocked a classroom door to try to stop the attack.

But he was struck by gunfire when the gunman shot through the door.

His father said "He was always there if someone needed someone to listen or some cheering up."

Cynthia Tisdale, 63, was a substitute teacher at Santa Fe High School and a grandmother of eight.

A family member said "Words don't explain her lust for life and the joy she got from helping people."

Kim Vaughan was also in art class on Friday when her school came under attack.