JUDY WOODRUFF: While the U.S. grapples with migrants coming to the U.S.-Mexico border, European leaders continue their struggle with the far bigger influx of refugees and migrants landing on their shores from the Middle East, Africa, and beyond. As William Brangham reports, the compromise E.U. leaders forged last night leaves many questions unanswered.

ANGELA MERKEL, German Chancellor (through translator): After intensive discussion on perhaps the most challenging topic for the European Union, it's a good message that we agreed on a common text.

MICHAEL PEEL, The Financial Times: It calls for centers within the E.U. countries where migrants can essentially be redistributed and their asylum claims processed, and then they move on from there. And the idea there is to take some of the pressure off the so-called front-line Mediterranean states, where most migrants arrive from, from North Africa. 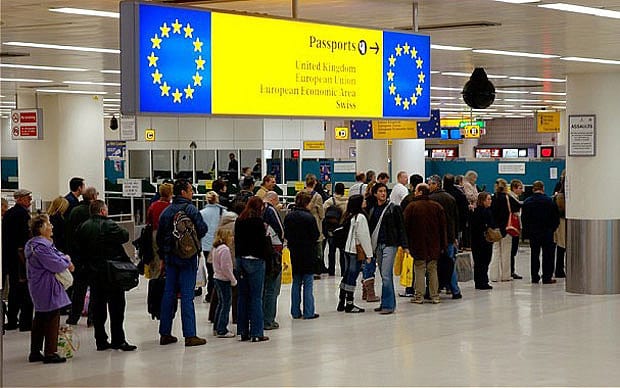 WILLIAM BRANGHAM: But, late last night, any agreement seemed in jeopardy, amid competing, stark differences among the leaders and a growing, anti-immigrant sentiment in Europe. Italy's newly elected prime minister, Giuseppe Conte, was swept to power in part by concern over the hundreds of thousands of migrants who've entered Italy in recent years. Italy wanted other E.U. nations to promise to take more of the refugees who land on its shores. But others in Central and Eastern Europe, like Hungary's Viktor Orban, rejected any formal quotas for accepting migrants. Orban has for years argued that migrants from the Middle East and Africa are a threat to his nation and to Europe more broadly.

VIKTOR ORBAN, Prime Minister of Hungary (through translator): The most essential goal is preserving the security of Hungary and securing the future of Christian culture in Europe.

WILLIAM BRANGHAM: Michael Peel says nations like Hungary and the Czech Republic wouldn't have signed any deal that set binding requirements on them.

MICHAEL PEEL: Tells us a lot about the deep divisions in the E.U. about how to deal with migration, because this is something that Italy in particular, as well as other Mediterranean states, where most migrants arrive, did not want. They wanted a compulsory mechanism to force all countries in the E.U. to share the burden and share the responsibility. But there are some states in the E.U., including, notably, Hungary and other Central European states, who simply refuse to do that.

WILLIAM BRANGHAM: Germany's Angela Merkel is facing a domestic political revolt that threatens her political survival. She has staunchly advocated for migrants entering Germany, and it's unclear if this agreement will quell that fight. Merkel did insert language into the deal that gets E.U. nations to agree to combat what's known as secondary migration. That's when migrants arrive in one country and apply for asylum, but then migrate to other E.U. countries. Concern over that second step has been one of main complaints of Merkel's domestic opponents.

MICHAEL PEEL: Angela Merkel can say that she got something from this summit. The Italian government can say that it got something from this summit. But the price of cobbling together this agreement in the early hours of the morning was that it has left a lot of things very vague. There are very few actual obligations to carry through in this agreement. And so critics say this is simply kicking the can down the road, and this is not a long-term solution.

WILLIAM BRANGHAM: While the number of migrants trying to enter Europe has declined since its peak in 2015, thousands still try the dangerous journey every month, and their plights will no doubt continue to roil European politics. For the "PBS NewsHour," I'm William Brangham.