Scientists in the Amazon rainforest have come across a new wasp that could encourage Hollywood to make a horror movie. The newly-discovered insect has a huge stinger on its tail that could inject a powerful and deadly sting into any unfortunate victim. A scientist said the stinger "looks like a fierce weapon". The stinger delivers a paralyzing venom that debilitates its victims. Once paralysis has set in, the wasp lays eggs inside the victim's body. Researchers from the University of Turku in Finland discovered the wasp. A professor in biodiversity research said: "The stinger of the new parasitoid wasp...is not only long but also very wide, in comparison to the size of the species." 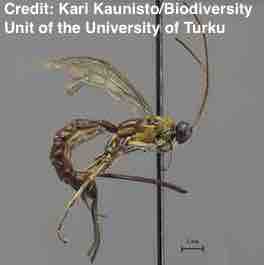 The professor explained that parasitoid insects put larvae inside their host - usually another inset. Once the larvae grow, they eat the insect from the inside out. Researchers believe the unfortunate victim of this new wasp is likely to be a spider, although they need to undertake further research to ascertain exactly which species of spiders might fall prey to the wasp's stinger. The professor explained that: "The giant stinger of the current species is very likely a highly sophisticated tool as well. Unfortunately, we can only guess at its other purposes." He added: "Beautiful and exciting species with strange habits catch people's attention and highlight the importance of maintaining vulnerable ecosystems."