WILLIAM BRANGHAM: There's a new crisis unfolding in the nation of Myanmar. It's the poaching of Asian elephants. As NewsHour producer Nsikan Akpan reports, this fragile species, which is distinct from their more numerous African cousins, is facing a growing threat.

NSIKAN AKPAN: The poaching of African elephants, where they are murdered for their ivory tusks, is well-documented. But halfway around world in Myanmar, their cousins, Asian elephants, are 10 times more endangered and facing a new serious threat. Poachers are taking the elephants' skin and turning it into ruby red jewelry.

PETER LEIMGRUBER, Director, Smithsonian Conservation Biology Institute: Yes, it actually was a huge shock. So we were following these elephants with our collars, and we started noticing that they disappear. If the collar stopped working, then they disappeared.

NSIKAN AKPAN: Peter Leimgruber is head of conservation ecology at the Smithsonian Conservation Biology Institute at the National Zoo in D.C. His team stumbled upon this poaching crisis during a routine tracking study with GPS collars that started in late 2014. 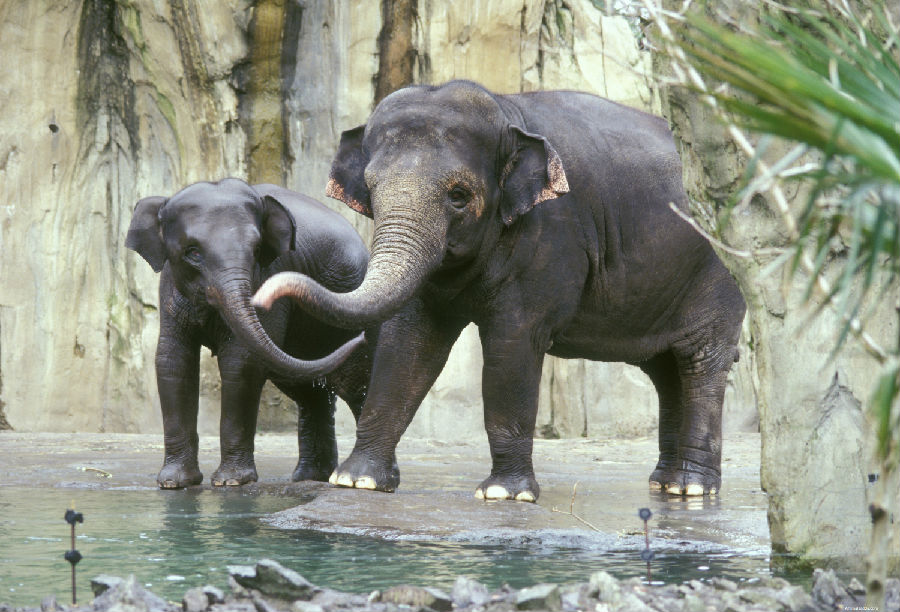 PETER LEIMGRUBER: We had 19 collared. And five of them we knew were poached. We found them poached. And then there were two that disappeared. And the way their movement changed right before they disappeared indicated that they were probably poached too.

NSIKAN AKPAN: This led the researchers and Myanmar officials to collect reports of poaching from local villagers.

PETER LEIMGRUBER: So, in the end, we found about 45 elephants killed in a very small area, area the size of a county.
NSIKAN AKPAN: This poaching was surprising because, unlike their African cousins on the open savanna, Asian elephants prefer the seclusion of the jungle, making them hard to hunt. John McEvoy was one of the researchers in the field.

JOHN MCEVOY, Smithsonian Conservation Biology Institute: Even our trackers have to spend hours and hours in the bush fighting through vines and other vegetation to even be able to see the elephants, so we can put the collars on them.

NSIKAN AKPAN: Prior to 2014, Asian elephant poaching had been relatively uncommon, because only males have ivory tusks, and, even then, it's a small percentage.

PETER LEIMGRUBER: But now that the females and calves are being affected, this will be a very significant impact on the population. It will actually, it's the surest way to drive the species into extinction.

NSIKAN AKPAN: A separate survey by the Myanmar government reported 25 poached elephants in 2016. Combined with the Smithsonian tally, that's 70 poached elephants over the last three years, double what the country witnessed from 2010 to 2014. Due to habitat loss, roughly 2,000 wild elephants remain in Myanmar. So, at its current rate, skin poaching could wipe out this population in just over 50 years.

BELINDA STEWART-COX, Executive Director, Elephant Family: And a lot of the buyers likes buy the original skin, which is sold by weight, because then they can see the original product and know that it's real.

NSIKAN AKPAN: Belinda Stewart-Cox is the executive director of Elephant Family, a British conservation group that specializes in protecting Asian elephants. Since late 2014, Elephant Family has been investigating this skin poaching and the black market trade surrounding it. Under international law, countries are allowed to import elephant skin from four African nations. But trading of Asian elephant in any form is prohibited, except in rare cases. To thwart potential sales of these new products in the U.S., Japan or other popular destinations for elephant parts, the Smithsonian, U.S., Fish and Wildlife and groups working in Myanmar are making public service announcements.

NSIKAN AKPAN: If this killing spreads, it could threaten the 50,000 Asian elephants left in the wild. Leimgruber said the key is reducing market demand for these products, before these animals are all gone. For the PBS NewsHour, I'm Nsikan Akpan, reporting from Washington, D.C.