WILLIAM BRANGHAM: Now the story of a daughter who grew up on the border between the United States and Mexico. She searches for herself, while also coming to grips with her father's mental illness. Amna Nawaz has the latest selection from the NewsHour Bookshelf.

AMNA NAWAZ: There's a fluidity to live lives along the United States southern border with Mexico that at times has had few boundaries. That is the life Jean Guerrero has lived, the child of a Mexican father and a Puerto Rican mother. Her memoir Crux tell stories from both sides of the border, which Jean is intimately familiar with as a full-time reporter for KPBS San Diego. Jean, welcome to the NewsHour here in person. We have talked remotely, but it's really nice to have you here in the studio.

JEAN GUERRERO, Author, Crux: I'm so happy to be here. Thank you.

AMNA NAWAZ: Congratulations on the book. It's a beautiful read. I want to ask you, though. You are a journalist. You have talked about your philosophy, the truth and nothing but the truth. When you're talking about your own family, though, it's really hard to disentangle fact from emotions sometimes. What was that like for you?

JEAN GUERRERO: I mean, for me, the reason I chose to do this very personal story as journalism was because I felt that I needed these fact-based tools that I developed as a journalist to sort of disentangle myself from my father. I mean, this is a story about my quest to understand my father, who for a long time believed that the CIA was after him, and that, and it was very difficult for him to tell what was fact and fiction. And he sort of brought me into that as a little girl, because he was, he had such a strong influence on me as a child, because he was my primary caretaker for the first few years. And I spent so much time with him. So I felt like I needed to use journalism to disentangle myself from my father, figure out what of the things that he was telling me were true and what wasn't true, so that I myself could sort of start to follow my own path.

AMNA NAWAZ: This is your story, ostensibly, but the through-line is your father, right? Why that lens? Why did you decide to present it that way? 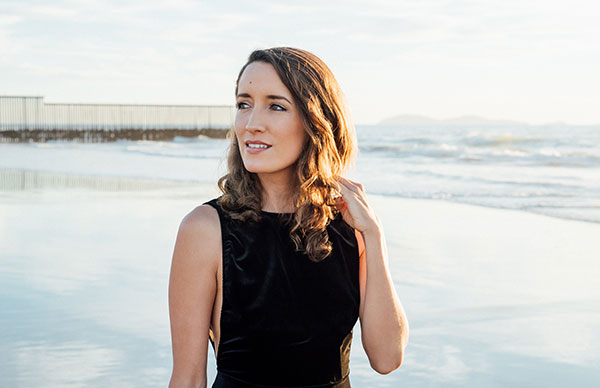 JEAN GUERRERO: The change that he underwent when he became first depressed, and then eventually became convinced that the CIA was beaming voices into his head, and doing things like wrapping himself up in aluminum foil to block out the voices, allegedly at one point, he destroyed the condominium that he was living in, that drastic change between the playful, loving, doting father that I had had as a child, and this sort of lost father that he became was very traumatic for me. And I developed this obsession with trying to recapture the father that he once was. And, as a teenager, that manifested in really self-destructive behavior, where I was experimenting with drugs, and I was going into Mexico and doing these very irresponsible things. So I saw Mexico as this way of exploring my father. He instilled in me my journalistic curiosity, because I believe that that curiosity is driven by the sort of same impulse that drives madness, in a sense. It's this sort of restlessness of intellect.

JEAN GUERRERO: I don't feel like I have this fixed identity. Like, for me, discovering who I was, it's always about navigating lines between the United States and Mexico. My mother's from Puerto Rico. So there's that. But not just in terms of crossing the border between countries, but also navigating the line between my mother and my father, because my mother, she's a doctor, and she was always a very by-the-book, by-the-rules person. And then you have my father, who's this very anti-establishment, some would say anti-reality figure. So, my identity is very much about trying to find that line between extremes.

AMNA NAWAZ: In your professional life as a reporter, you have been doing some incredible reporting along the southern U.S. border, and specifically on separated families. More recently, we have been able to feature your work here on the NewsHour too. How has this story that you have uncovered about your own family and how you cross borders, how your ancestors crossed borders, how has that influenced or informed how you report on this story now?

JEAN GUERRERO: I think that there's this feeling that, once these families are reunited, that the story's over, that, finally, justice has been done, the families that were separated are together again, and it's a happy ending. But these children have been separated from their parents, in some cases for months, some of them under the age of 5, and that's a trauma that is long-lasting. And it's something that I know, from talking to these families, they really want access to mental health services. This is, the struggle for them is not over, because the children are acting out, they're having nightmares, night terrors, crying all the time, because they think that their parents are going to be taken away from them again.

AMNA NAWAZ: What is your relationship like today with your father, to whom you have devoted so much time and energy exploring and understanding?
What's it like today?

JEAN GUERRERO: He was initially very concerned about it, because he thought that it would high, it would bring the attention of the CIA and because of the things that he believed. But when he realized what was driving me to write it, it was just this thing that I had had to do since I was a teenager, really, he became very supportive. And he actually showed up to my launch party in San Diego. And I was very surprised to see him there. He just asked me not to tell anybody that he was there, because he didn't want people turning around and looking at him and saying, that's the father in the book. But he was there, and he showed up on his motorcycle and stood in the front row. And I, it just meant the world to me.

AMNA NAWAZ: It's a beautiful story, both his story yours, your entire family's, going back generations. The book is Crux: A Cross-Border Memoir. Jean Guerrero, thanks so much for being here.

JEAN GUERRERO: Thank you so much for having me.