JUDY WOODRUFF: Now: Should colleges be accountable for the graduation rates of their students? Hari Sreenivasan reports from Florida for the conclusion of our special series on Rethinking College, which is part of our weekly focus on education, Making the Grade.

HARI SREENIVASAN: This year at Florida International University, both the graduates and the staff have something to celebrate. The state of Florida awarded the college 73 million dollars in extra funding for their students' success. To earn the extra funding, public universities across Florida are graded each year on how well their students do on key measurements, like graduation rates, post-graduation employment and how much debt their students take on.

ELIZABETH BEJAR: We are really focused on student success. We do take responsibility, so it is not our students who fail. When they do fail, it's the university.

HARI SREENIVASAN: Florida is one of 35 states who tie college funding to metrics like graduation rates. The results have been mixed. Some studies show the funding incentives haven't improved student outcomes. Others say rankings can penalize colleges with high numbers of low-income students. Still, outcome-based funding continues to be popular with state legislators. As some states begin tying higher ed funding to student outcomes, some education experts are starting to look at student success on a national level. And they're asking the question, should colleges be responsible for the graduation rates of students, especially when they're paying with taxpayer dollars? In a study by the Washington-based think tank Third Way, education analysts looked at newly released data from the Department of Education on graduation rates at four-year universities.Tamara Hiler, who authored the report:

TAMARA HILER, Third Way: Institutions on average were doing a significantly better job of graduating their wealthier students and leaving their lower-or moderate-income students behind. 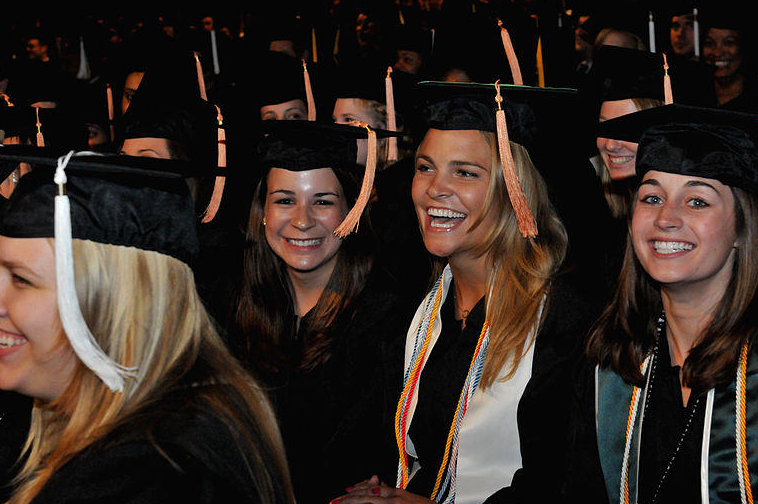 TAMARA HILER: Thirty billion dollars is invested every year by taxpayers in the Pell Grant program. But up until last fall, we had absolutely no idea how well those Pell students were doing. We couldn't even answer a basic question around what is the percentage of Pell students that graduate each year.

HARI SREENIVASAN: The report, called, The Pell Divide, found an 18 percent gap in the graduation rate between students who use Pell Grants and those who don't. But there were exceptions. Florida International University has a large number of low-income students. However, students here who use Pell Grants graduate at about the same rate as non-Pell recipients.

TAMARA HILER: You could look at two institutions that were taking the exact same share of Pell students, and one was getting wildly different outcomes than another. And so what that shows us is that demographics isn't destiny, right? It's possible at the institution level that there are resources and supports than can be put in place to make sure that all students are graduating.

HARI SREENIVASAN: That is what Florida International University did.

ELIZABETH BEJAR: We took a holistic approach to what we call student success.

AMBER MANNINGS, Student: They promote success or development the correct way beyond your classroom, beyond pencil and paper. So it's more so concentrated on how well you are developing as a person, maturing, if your needs are being met, how you're doing mentally, how are you dealing with stress, if you need some additional help, like mentoring. They advise you on all life categories.

HARI SREENIVASAN: So the school is giving you an academic adviser, a success in life coach. They're giving you tutors and assistants. That seems like a lot of other stuff besides just teaching you.

AMBER MANNINGS: Yes. And I definitely think that I wouldn't be sitting here today if I didn't have those resources.

HARI SREENIVASAN: Mannings' high school years were a challenge. For a time, she even lived in her car. Now a college senior, she is applying to law schools and hopes one day to be a United States senator.

AMBER MANNINGS: I feel like institutions should focus, of course, how you are performing academically, but your overall well-being. I know plenty of people that can attest to how stressful college can be, especially if you don't have a family member to help you, push you, encourage you that you can achieve this.

HARI SREENIVASAN: Jacqueline Diaz is the director for advising and student success.

JACQUELINE DIAZ, Director, Center for Advising and Student Success, Florida International University: In order for a student to be retained, to stay in college, and to be successful and complete, they have to be engaged and they have to be involved.

HARI SREENIVASAN: The university calls the approach high-tech, high-touch. It's a method colleges throughout the country are adopting. By using predictive analytics, advisers can reach at-risk students early. Florida International University identifies students who are first in their family to attend college, have unmet financial needs, had mediocre grades in high school, or may have signed up for unusually challenging courses.

JACQUELINE DIAZ: It's proactive. I would say it's a little intrusive. But when I started in advising, it was very much a waiting game. You waited for them to come to you. And I think what we found was a lot of the ones who needed help were not coming to us.

HARI SREENIVASAN: Danny De Leon is a Pell Grant recipient and a first-generation college student majoring in engineering. Before he was allowed to register for classes, he was flagged by analytics. A hold was placed on his account until he went in for advising.

JOANNA SANABRIA, Florida International University: Many students don't necessarily have support at home that some students do. So we just put that hold on, have them come in, so they meet us.

DANNY DE LEON, Student: When I went to go see her, she took off the hold, but she also kind of told me like my, the courses I could take.
She told me when I could take them. So she kind of gave me a little plan to get my degree.

HARI SREENIVASAN: Now a senior, De Leon credits Sanabria for keeping him on track to earn a bachelor's degree in civil engineering. The university plans to use the state's performance award to continue to improve, and lift the overall graduation rate, which still remains below the national average.

ELIZABETH BEJAR: There is a renewed focus, if you will, on what our core mission is and should be.

TAMARA HILER: We really have no way, especially at the federal level, to hold those institutions accountable and to figure out ways that we can make sure we're investing those tax dollars more wisely.