The Montreal Museum of Fine Arts in Canada has teamed up with a group of doctors to help sick people. The doctors will prescribe visits to Montreal's art galleries, instead of giving them medicine. The museum is currently taking part in 10 trials on patients to find out what effect art has on health. The patients include people with breast cancer, eating disorders, epilepsy and mental health problems. Thomas Bastien, director of education and wellness at the museum, believes that art heals. He said: "We saw that the museum was good for people, so we decided to start this program with the doctors. If you're suffering from breast cancer, you could come to the museum and you might feel better." 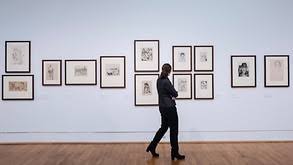 A doctor who has a lot of experience in helping to heal people with art spoke about the benefits of art therapy. Dr Hélène Boyer said: "There's more and more scientific proof that art therapy is good for your physical health." She said looking at art increases hormones released in our bodies. These hormones are responsible for our well-being. Dr Boyer said visiting art galleries released the same kinds of hormones that are released when we exercise. Nathalie Bondil, the museum's director-general, said physical activity and art gave similar health benefits. She said: "I am convinced that in the 21st century, art will be what physical activity was for health in the 20th century."