There is a museum for everything these days. The latest museum to open may turn you off your dinner. It is the Disgusting Food Museum, which opened earlier this week in Malmo, Sweden. The new exhibition will allow people to analyze why they love and hate certain foods. It might also lead them to consider alternative food sources. The museum's founder, Dr Samuel West, explained why he created the project. He said he was researching the effect of meat consumption and its effect on the environment. This made him think about alternative sources of protein, like insects. He said: "If you ask people if they want to eat bugs, they say 'that's gross.' That's the obstacle, but maybe I can make them reconsider." 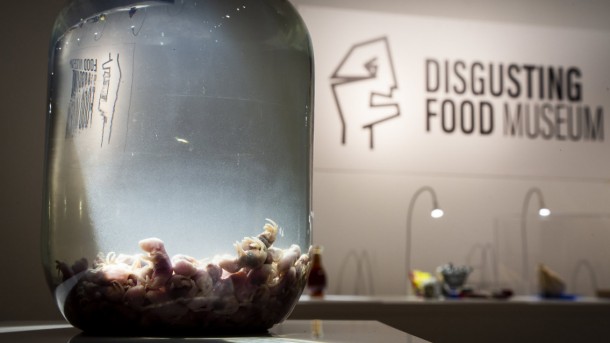 The museum is a 400-square-meter space that will challenge four of our five senses - smell, touch, sight and taste. The displays include food from around the world that some people might think is "disgusting". However, people in other parts of the world think this food is totally normal and is a regular part of their diet. The food exhibits include American favorites such as Jell-O salad and world food like fried tarantula, fermented shark, roasted guinea pigs and sheep eyeball juice. Dr West said we could all eat any food, but our culture tells us what is tasty and what is not. He said: "What we find disgusting has to be learned - it's purely cultural." He added: "One of my worries is that it will start stinking in here."