JUDY WOODRUFF: But now: The U.S. locks more people up than any other country. More than two million Americans are in jails or prisons here, and more than 200,000 of those prisoners are female. Amna Nawaz takes a closer look at the conditions faced by women behind bars.

AMNA NAWAZ: Judy, nearly 30 percent of all incarcerated women worldwide are in the United States. And the number of women in U.S. prisons has risen more than 700 percent in the last 40 years. With that increase came a recognition that men and women in custody have different needs. Now, earlier this year, the Department of Justice's inspector general conducted a review of how the Federal Bureau of Prisons handles female inmates. Leaders from both organizations testified today on Capitol Hill, where Democrats and Republicans expressed concerns about prison conditions. The report, released in September, made several recommendations. Among them, provide better training for staff on needs of women and trauma victims. More than 85 percent of women in prison reported some physical or sexual trauma in their lifetime. Increase awareness of pregnancy programs for inmates. Just 37 percent of pregnant inmates participate in programs. And increase access to feminine hygiene products. To talk about how these recommendations would affect women in prison, I'm joined by Andrea James. She's an attorney who served two years in a federal prison for mortgage fraud in Danbury, Connecticut. After her release, she founded the National Council for Incarcerated and Formerly Incarcerated Women and Girls. Andrea James, welcome to the NewsHour. As we mentioned, before you were an advocate, before you served your time, you were an attorney focusing mostly on criminal defense. I'm curious. When you first got to prison, what was it that struck you about the people and the conditions inside? 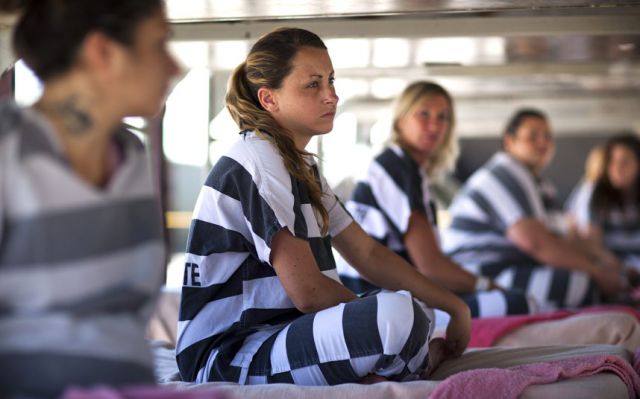 ANDREA JAMES, Founder, National Council for Incarcerated and Formerly Incarcerated Women and Girls: In terms of what struck me when I walked into the federal prison for women in Danbury, Connecticut, as an incarcerated woman, was to see a sea of predominantly black and brown women who were being warehoused in a prison. And coming from the extensive background that I have with my family as civil rights folks, it just really made me realize that what I was seeing was the result of policy that had disproportionately affected poor women, women of color, and that a prison will never be the place for a woman or a girl to begin to heal and advance her life.

AMNA NAWAZ: Let me ask you about something else you mentioned about the relationship between incarcerated mothers and their children. There's a striking statistic. It's more than 60 percent of women in state prisons have children under the age of 18. When you served your time, you left behind some young children as well. Tell me about what it's like to be serving time in a prison and try to maintain that bond. How easy is it?

ANDREA JAMES: Well, it's not easy at all. I was very fortunate. I was very privileged, as an incarcerated person. I had a husband who brought my children to see me every single visit. I left behind at the time a 12-year-old daughter. And my son was six months old when I walked into that prison. And, for me, I had the opportunity and that was incredibly heartbreaking. It was incredibly difficult to be separated from them. And I walked into a prison that was crammed full of women who had not seen their children. And then, even after incarceration, phone calls are extraordinarily costly. It's very difficult to be able to stay connected to your children, particularly if, when you were sent to prison, your children were separated and sent to different households to live in. And so mothers often had to make a decision as to which child she was going to call, and often had only enough money, we made 12 cents an hour in the prison for the most part, only having enough money to call one child or make one phone call to a child a month.

AMNA NAWAZ: You know, Andrea, some will say, look, lack of resources, access to resources, that's a problem system wide, not just for women, but also for men. So why do you think that this is a specific issue that needs addressing for women who are incarcerated? And, also, why do you think we're talking so much about it right now?

ANDREA JAMES: Women have very specific, gender-specific reasons as to what leads them into the behavior that lands them on a prison bunk.
And, often, the system doesn't recognize those things as mitigating factors, or even pays attention to what those things are. And so we need to do a better job of paying attention that. And, yes, there are men, obviously, who are incarcerated, and they make up the majority of the prison population in the country. But the fact of the matter is that, for many of the reasons that women are incarcerate for, we need to find other solutions, because they are directly in relation to women being victims themselves.

AMNA NAWAZ: You advocate for prison reform, making conditions better. We heard the pushback in Congress earlier today. Some will say, prison is not meant to be comfortable. People who are serving crimes, serving time for committing crimes don't need to be that comfortable and have all these resources available to them. What do you say to that?

ANDREA JAMES: Well, listen, if prison was the answer, we wouldn't have the, we wouldn't be the most incarcerating country on the planet right now. Prison is not the answer. And I think we need to learn from the mistakes that we have made. We have increased the incarceration numbers in this country for four decades now. That's long enough for us to realize that it's not the solution. The solution needs to come from within the communities that have been most directly affected. We need investments, not in more prison and prison building and investing in those prisons. We need to invest in the communities where folks are coming from, where they are disproportionately represented in the prisons. And that includes social and economic resources that currently are vastly lacking in many marginalized communities.