For many decades, scientists believed the earliest humans originated in East Africa. This belief has changed because of a collection of 2.4-million-year-old stone tools found in Algeria. Scientists now believe that Algeria and not East Africa is the cradle of civilization - where humankind began. The new find consists of 250 tools. There were also 296 animal bones. The scientists say the animal bones show that early humans were butchering meat. Dr Mohamed Sahnouni, leader of the project, said: "The evidence from Algeria changes the earlier view that East Africa was the cradle of humankind." He added: "Actually, the whole of Africa was the cradle of humankind." 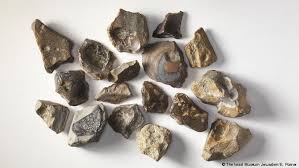 Archaeologists have been digging at various sites on this project for 25 years. The sharp-edged tools and bones were discovered near the city of Setif, about 200 miles east of Algeria's capital, Algiers. In particular, the animal bones excited the scientists. Dr Sahnouni said it is now clear that humans were butchering animals for meat 600,000 years earlier than previously thought. A Spanish archaeologist said: "The effective use of sharp-edged tools ...suggests that our ancestors were not mere scavengers." She said it wasn't clear whether or not they hunted, but they did compete with other animals to get access to meat. Dr Sahnouni now hopes to find the tool-makers and even older stone tools.