Judy Woodruff: Next: how faith, religion and modesty are influencing style for Muslim women. Jeffrey Brown reports on how modest fashion grew into a multibillion-dollar business and why it's now being celebrated in brand-new ways.

Jeffrey Brown: It's a fashion show in a museum, with an unusual focus. This is an exhibition of contemporary Muslim fashion, the first of its kind in the U.S., put together by the de Young Museum in San Francisco.

Jill D'Alessandro: It's an exciting time. It's the right time to be doing this.

Jeffrey Brown: On display, some 80 ensembles by more than 50 designers, from glamorous gowns and couture fashion worn by Qatari royalty, to leisure and sportswear, including Nike's pro-hijab line worn by U.S. Olympic fencer Ibtihaj Muhammad. Most of the clothing is from the Middle East and Southeast Asia, with a sprinkling of American and European designers and an emphasis on youth.

Jill D'Alessandro: Half the designers in the exhibition are women between the ages of 20 and 30. And so there's these women who want to create a wardrobe that fits their lifestyles, and that's really exciting.

Jeffrey Brown: This is what's called modest fashion, concerned with covering much of the body, often, but not exclusively based on religious teachings and customs. The term hijab, often used to refer to head scarves worn by Muslim women, describes the act of covering up generally. But it quickly becomes clear here that modesty means different things in different places and to different people.

Saba Ali: A lot of us are kind of like, oh, I wish we could change up the name a little bit. I like to use the word discrete or just a little bit more mysterious, you know?

Saba Ali: Modesty, I don't know, I think sometimes people get this like boring image of like a grandmother, somebody in dowdy clothes. And that's not, you can see here that's not necessarily the case.

Jeffrey Brown: Saba Ali, American-born of Pakistani descent, was an adviser to the exhibition. A personal stylist by profession, she helped arrange the head scarves and other clothing on the mannequins. She also lent her own wedding dress, a beautiful ensemble she found in her parents' homeland.

Saba Ali: I feel like it's getting a lot more action here than it actually did at my wedding reception.

Saba Ali: A lot more attention. A lot more people are seeing it. It's being photographed so beautifully.

Jeffrey Brown: Now the mother of four, she says she grew up amid modest clothing, but made her own decision to start wearing a head scarf only when she was in college.

Saba Ali: Within the Muslim community, there are different levels of modesty that women adhere to. And it's really a woman's own choice. And I find that really ironic, because, when people see a covered woman, they just assume that it's so anti-feminist and somebody must have told her to do that. 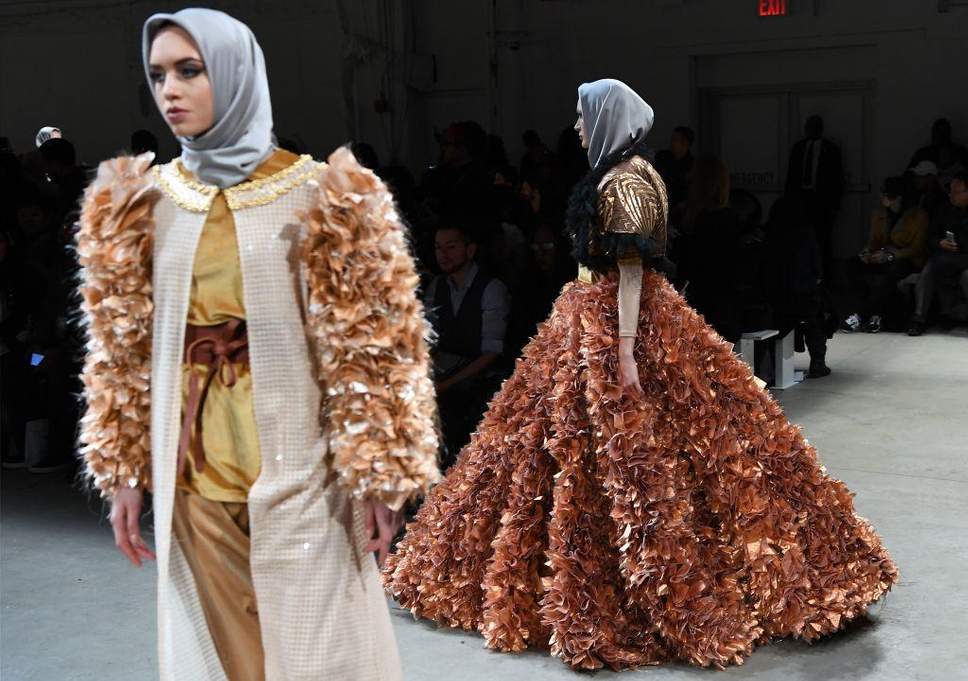 Saba Ali: That's the stereotype, and that's what we're trying to open up hearts and mind to here. You know, I'm not living in a country where maybe my head scarf is understood. So it's almost like a duty upon me to go out and kind of look my best.

Jeffrey Brown: There are countries and cultures where clothing restrictions are imposed. Think of Iran's morality police. And controversies continue. In 2016, for example, the burkini, combining the words for burka and bikini, was temporarily banned in some French towns. But millions of Muslim women around the world are making their own choices, as celebrated in this music video of Mona Haydar's "Wrap My Hijab."And the modest fashion industry has exploded, already estimated at more than several hundred billion dollars worldwide and growing fast. It's seen on magazine covers, in fashion shows around the globe, in the art world, and on social media, where fashion is often used to address social and political issues.

Lisa Vogl: Everybody has a different level of modesty.

Lisa Vogl: I have even seen a lot of women that aren't Muslim wear them because they're just so stylish.

Jeffrey Brown: Lisa Vogl, a fashion photographer who converted to Islam in 2011, launched the Verona Collection four years later in Orlando, Florida. Earlier this year, it was picked up by Macy's, the first major U.S. department store to sell hijabs.

Jeffrey Brown: In fact, the rise of modest fashion goes beyond any particular religion, according to Washington Post fashion critic Robin Givhan.

Jeffrey Brown: In the United States, with our divisive politics, which is so often around religion, some of it very focused on Islam and Muslims, is it possible to have this conversation, to see a fashion exhibition, without putting it in a political context?

Robin Givhan: Probably not, and I don't even know that you would want to take it outside the political context. I think you need that in order to really understand to some degree how provocative some of the pieces are.

Jeffrey Brown: The exhibition Contemporary Muslim Fashions closes later this week. It goes next to a museum in Frankfurt, Germany. For the "PBS NewsHour," I'm Jeffrey Brown at the de Young Museum in San Francisco.