The teenage Saudi asylum seeker who fled Saudi Arabia two weeks ago has been granted asylum by Canada. Rahaf Mohammed Alqunun, 18, arrived at Toronto's Pearson International Airport on Saturday. She was greeted by Canada's Foreign Minister Chrystia Freeland, who told reporters: "This is a very brave new Canadian." She added: "Rahaf wanted Canadians to see that she has arrived at her new home. She has had a very long and tiring journey and so would prefer not to take questions today. And she is now going to go to her new home."Rahaf was all smiles as she was whisked through the airport wearing a hoodie emblazoned with the word "Canada". 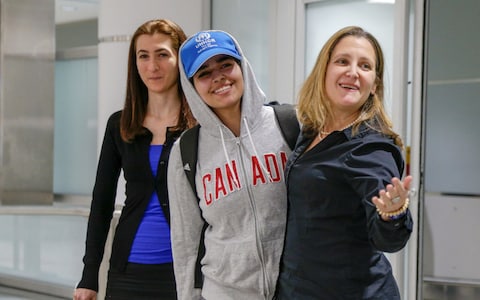 Rahaf is fleeing alleged abuse by her family, whom she claims want to kill her. She was detained in Bangkok on January 6th while trying to board a flight to Australia, where she initially wanted to seek asylum. She appealed for help on Twitter and her plight gained worldwide attention. She was then granted refugee status by the United Nations Commission on Human Rights. Canada's decision to grant asylum to Rahaf could worsen relations between Canada and Saudi. Relations are already strained after Canada called for the release of a jailed Saudi human rights activist. Saudi suspended new trade with Canada, froze Saudi flights to and from Toronto, and cancelled scholarships for Saudi students in Canada.