AMNA NAWAZ: Last week's Brief But Spectacular featured Melissa Malzkuhn, who was born deaf into a deaf family. She spoke about how access to sign language offers access to humanity. Tonight, we have a separate take on language and deafness from Caroline Clark. Born into a hearing family, Clark was diagnosed as deaf at the age of 2. She reflects on her relationship with words and how she turned to technology to help her speak. Clark now works with the Baker Institute, a nonprofit that provides speech therapy for deaf children. 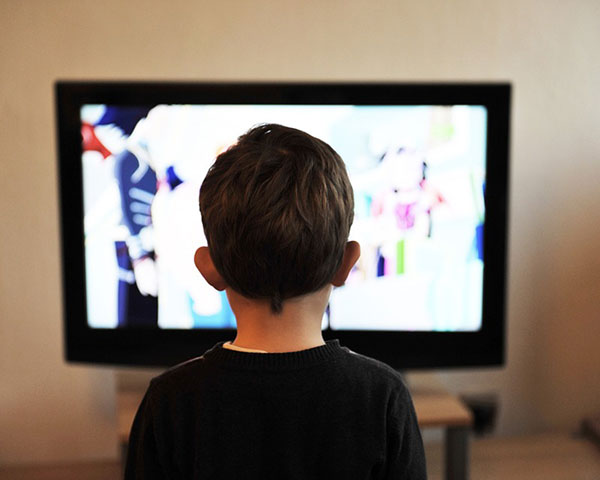 CAROLINE CLARK, Student: I was diagnosed with deafness at 2. And I will never forget the word, the first word that I learned. And it was the word up. So, my mom told me this story. She said that she was in my grandmother's house, and she would hold me in her arms, and she would carry me up and down the stairs. And she would say to me, Caroline, up, up, we go. And she even sometimes would apparently take my hand and place it on her throat, and I would feel the vibrations of what she was saying. And, finally, when I was two-and-a-half, I said the word back to her, up. And when my mom heard that, she cried tears of happiness, because I think that moment she knew that I learned to speak. Learning to speak when you can't hear is an interesting process. You pay close attention to how the, forming the lips. Most of all, it's just repeatedly trying the word over and over again. There's a magnet that is inside of my inside of my head and then there's a magnet outside of my head. So, sound comes through the magnet. When it first gets turned on, you don't understand anything you're hearing. It sounds like beeps, and then slowly sounds like Donald Duck. And then, one day, you ask someone, did you say the word door? And they said, yes, I said that word. And so, over time, you begin to understand this new language. I didn't learn sign language. My mom made a conscious decision to teach me how to speak. As I got older, she said, OK, you can learn sign language. And I honestly, I had other things I wanted to learn over sign language. One time, I was in the grocery store, and I was just browsing among things, buying some groceries. And this guy comes up to me and started signing to me. And I couldn't sign back. It was just very awkward for me. I'm clearly a deaf person, but I can't even communicate to this other deaf person. And, in that moment, I felt this huge divide between our walls, between my world and his world. And, yes, I felt a little bit embarrassed. I'm fully proud of being deaf, but it's not, being deaf is not a big piece of my identity. Frankly, I identify more as a woman and being gay over being deaf. So, dating while you're deaf is an interesting experience. First off, people always ask you where you're from in the beginning conversation. And you have to say you actually have a deaf accent, and things get awkward pretty quickly. I think common misconceptions of deaf people is that we experience the world in a fundamentally different way, we can't see the same things, or we can't hear the same things, we don't experience the same thing. And that's not true. We want the same things. We crave the same things. We want to feel loved. We want to feel included. When I was younger, I was so annoyed. I would be leaving school, and all my friends, they are going off to play dates, and I was going to a speech therapist. I think that fundamental experience of really learning how to fail over and over and over has really molded me into the person I am today, being told constantly, you're not pronouncing that right, try again, do it over. And so I really have embraced this growth mind-set. And I have a firm belief that I could do anything I want, as long as I try hard enough. I'm Caroline Clark, and this is my Brief But Spectacular take on being deaf.

AMNA NAWAZ: You can watch last week's episode with Melissa Malzkuhn and all our Brief But Spectacular episodes at PBS.org/NewsHour/Brief.