Wildlife experts have discovered an unusual animal that they believe could be a new species. The animal was found on the French island of Corsica. The experts showed reporters a "cat-fox" that they had captured in the mountains of Corsica. The experts said they found a group of sixteen cat-foxes in a remote area of Corsica. The captured cat-fox measured nearly 90 centimeters in length from head to tail. The creature has very wide ears, short whiskers and a thick coat. It also has stripes on its front legs. Gilles Simeoni, a local government official, thanked the wildlife team for finding the cat-fox. He said: "It's a wonderful discovery." He added that Corsica was a "paradise of animal and plant biodiversity". 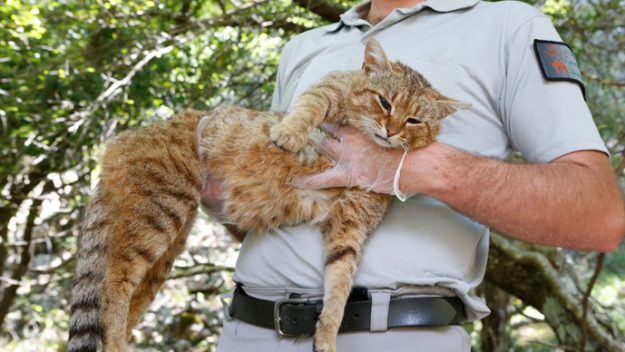 The cat-fox has been talked about by local people in Corsica for decades. It had become a mythical creature with farmers, who tell stories about seeing it. Corsicans are now happy and proud that their island is home to a new species of animal. Scientists believe that the cat comes from a little-known species that could have originated in Africa and the Middle East thousands of years ago. It is largely a nocturnal animal. One scientist said the cat-fox could have been brought to Corsica as far back as 6500BC. Another scientist said: "By looking at its DNA, we could tell it apart from the European wildcat. It's close to the African forest cat, but its exact identity is still to be determined."