JUDY WOODRUFF: The U.S. House of Representatives began a six-week recess today amid questions about whether Democrats will try to impeach President Trump. The issue arose again this week, as former special counsel Robert Mueller testified on the Russia investigation. Today, House Speaker Nancy Pelosi said again the time is not ripe, but denied she is trying to "run out the clock".

REP. NANCY PELOSI (D-CA): We will proceed when we have what we need to proceed, not one day sooner. And everybody has the liberty and the luxury to espouse their own position and to criticize me for trying to go down the path in the most determined , positive way.

JUDY WOODRUFF: Meanwhile, House Judiciary Chair Jerry Nadler announced that the committee is going to court for access to grand jury material in the Mueller report. He said it is in effect part of an impeachment investigation. Our congressional correspondent, Lisa Desjardins, is here now to fill us in on the significance of all this. So, Lisa, explain, what exactly are the Democrats doing? How is it different from what they have done before? 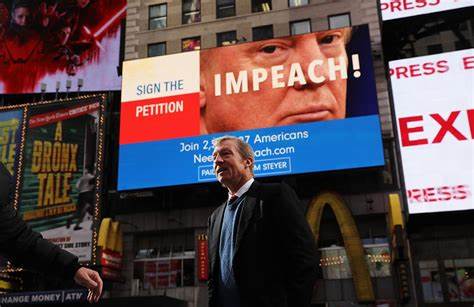 LISA DESJARDINS: This is different and significant, because now House leadership, Jerry Nadler and Nancy Pelosi is on board with this as well are saying, we are launching an impeachment investigation. They are formally declaring that they are looking into whether they will have to file later articles of impeachment. That's what Pelosi was talking about. Ultimately, will they decide to file those articles of impeachment? She has not made the decision yet. But they have made the decision to begin a formal investigation on the road to impeachment.

JUDY WOODRUFF: Taking note of that. So why are they doing this and why right now?

LISA DESJARDINS: Two reasons. It helps them in court to say, we need to exercise a very prominent constitutional authority, because we believe the president may have done something impeachable. That has in the past made a difference in court hearings in our rulings. The other, Judy, is political. We have known Democrats for weeks have been in favor or not in favor of an impeachment inquiry. The semantics have been a problem for Democrats. Now they're trying to wash that all away by saying, listen, we have been investigating, and now we are investigating and we are formally saying, this is an impeachment investigation. They're not going to take a separate vote on whether to open an investigation. They're simply doing it.

JUDY WOODRUFF: And they're doing it, as you say, in the form of a court filing.

LISA DESJARDINS: That's right. That's where they announced it, but they also had a phone call with reporters. Some of us were confused at first over what this meant. They told us on that call very firmly, this is an impeachment investigation now. We are calling it that. We think it's been this way the whole time, but we're now saying, this is what it is.

JUDY WOODRUFF: Lisa Desjardins, explaining it, thank you very much.