Hari Sreenivasan: For more on the investigation and the victims in Ohio, Jim Bebbington, editor of The Dayton Daily News joins us now via Skype. Thanks for being with us. First, let's focus on the victims here. What do we know about the people that were gunned down last night?

Jim Bebbington: Well, we are still putting all of that together. It was a group that included the shooter's sister. That was a new revelation just a short while ago. So we're looking into family dynamics and family issues as to whether that played any role. The others are a very cross section of Dayton. A majority of the victims were African-American last night but there were white victims as well. And it was a group that just locally, I would have thought would be a typical Oregon District crowd on the sidewalk on a Saturday night.

Hari Sreenivasan: And what about all of the people that were taken to hospitals? We heard this morning that a number of them had already been discharged.

Jim Bebbington: Correct. There was one person that was described as being in critical condition and needing to go into surgery. And then there were many people who were discharged already by the time they gave any information out. With everything from shoot in wounds to sprained ankles and cuts from the chaos of escaping.

Hari Sreenivasan: This is a tremendous amount of carnage in a minute if that's how long it took for police to respond.

Jim Bebbington: Absolutely. I mean it is something we are also still trying to piece together. The videos that we have seen, we've seen some surveillance videos from neighboring facilities or neighboring bars that add their own cameras out front. And it absolutely it doesn't even look like it takes a minute, it looks like it takes 30 seconds from the videos that I've seen, spraying a crowd, people running going down and then the video that I've seen in particular things calm down almost immediately. 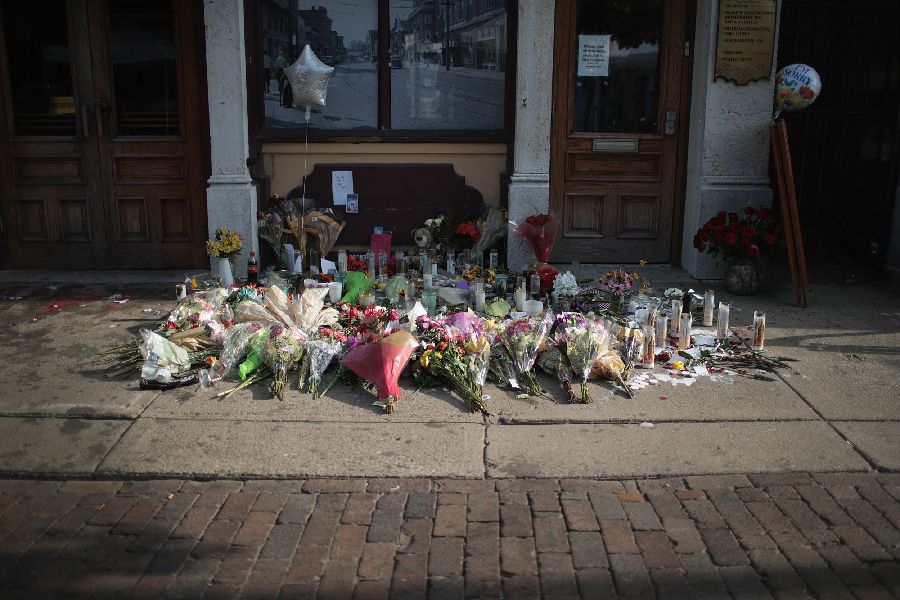 Hari Sreenivasan: Is there anything more about the motivations of the person who did this that's becoming any clearer now?

Jim Bebbington: Well we know 24-year-old gentleman who grew up in our area. We've been looking to speak to anyone who knew him growing up, mining social media. There are some images that if they are him show when he was a young teenager a predilection towards some fairly violent language that he liked to take pictures of, sketching us into notebooks that he would then share on social media. So that is what we're seeing.

Hari Sreenivasan: Any sort of membership and any organizations or nowadays now everybody is kind of interested in message board postings and was there anything like that before this shooter unlike the one in El Paso who decided to perhaps, law enforcement officials are still connecting the dots there?

Jim Bebbington: Again I wish we knew. We have not found anything to that effect. There are some reports of some family dynamic problems that do go back many years. And so that is actually part of our most focus right now.

Hari Sreenivasan: And what about that district now? Are people back there or the businesses open? Have they just stayed close through the weekend? Is it still an active crime scene?

Jim Bebbington: It is still an active crime scene through the afternoon. There is a evening vigil that is planned right on the street itself after which point the street will be opened up, the crime tape will be taken out. The bars and restaurants in that area some are open this afternoon. The ones that are a block or two away away from the scene.

Hari Sreenivasan: All right. Editor of the Dayton Daily News Jim Bebbington joining us via Skype from Dayton thanks so much.