Hari Sreenivasan: Amanda, it looks like a, kind of a gorgeous day on the beach.

Amanda Becker: People are returning to a beautiful day today. They started letting permanent residents and critical business owners and personnel back in at noon. And they are returning to actually what is a perfect beach day. Some strong waves but other than that, it's gorgeous here.

Hari Sreenivasan: Yeah, you can see some of those. How far and how high did the sea get during the storm? I'm assuming you couldn't be standing where you are now.

Amanda Becker: Yes. Actually yesterday afternoon when I was here a few hours after the hurricane cleared out was all the way up to the dunes. There was really no beach left. So they're starting, and I'll turn a little bit you can start to see, they are regaining their beach. It's kind of almost back to where it was two days ago before the storm.

Hari Sreenivasan: And what kind of damage did the people there in Nags Head or along the Outer Banks experience?

Amanda Becker: So I've only been able to get to the northern Outer Banks because the road is still closed south of Nags Head, past the National Seashore there's another bridge. Anytime there's a severe storm here, it gets really hard to get to Cape Hatteras, Ocracoke Island of course, which has been on the news, Frisco, areas like that. Basically sand, it's a very narrow part of the Outer Banks and on either side of Route 12, you have the ocean on one side with a very small dune and a marsh on the other side, kind of on the sound side. So anytime there's any sort of rainfall at all that tends to wash out, it tends to wash a lot of sand over there. So it could be a couple more days before residents of the South Outer Banks are able to get in and out again, but in the areas of the northern Outer Banks, people are able to return starting today.

Hari Sreenivasan: All right, these are people who are familiar with living along the coast. Did most of the people there evacuate when they were told to? 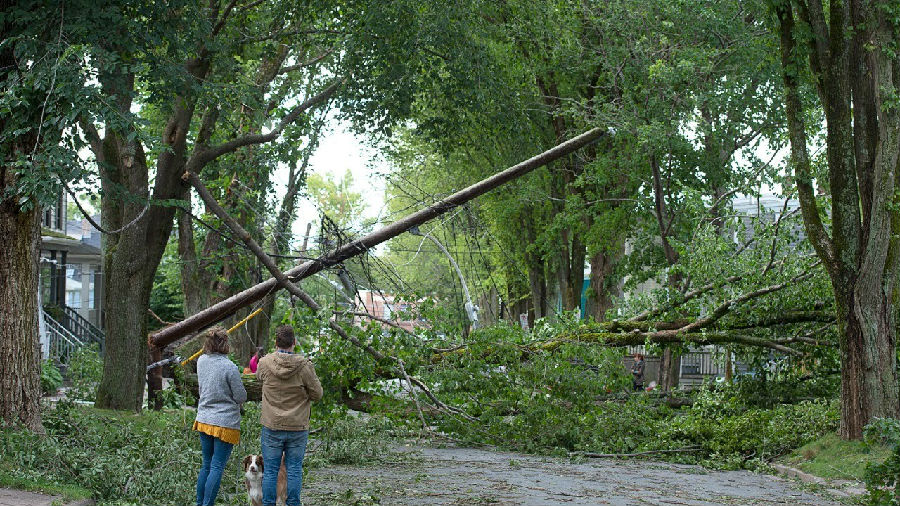 Amanda Becker: No. So it's a very orderly procedure here. Most of the houses right along the beach are rentals, people own them and rent them out to vacationers. The vacationers were the first to go. For liability reasons, the rental companies don't allow them to stay here. They were gone. So when I was here I guess it was Thursday afternoon ahead of the storm Thursday during the day, you know it seemed very quiet. A lot of businesses were closed, grocery stores were closed. The local Publix was being used kind of as a staging area, first responders, but all the permanent residents told me they were staying put. A lot of them have houses that are not right on the beach, either as their primary residence or a secondary residence. So they were going to those houses but they were not leaving the area. And one of the reasons why is you can't get here except for a few bridges. And once they're closed you know, they've complained that in the past it delays insurance estimates because they can't get back into their houses.

Hari Sreenivasan: And what kind of sort of a government response do you see out there? Are there any emergency vehicles? Are there any kind of support services that have made their way out to the places that you've been to?

Amanda Becker: So the places I've been to have sustained virtually no damage. On the sound side of the Outer Banks kind of facing inland, there's actually been more damage because there's more trees over there, there are more things to fall down in the wind. So you see a lot of utility trucks out today. The North Carolina Department of Transportation clearing debris things like that. Looking at power lines, fixing utility poles, people cutting trees that have fallen. But even the houses right along the ocean, I've spent today and actually yesterday right after the storm came through right along the beach road and you know people put out their storm shutters and other than some broken fences and things like that the houses is here all OK.

Hari Sreenivasan: All right, Amanda Becker of Reuters joining us from Nags Head via Face Time. Thanks so much.