Scientists have found fossils that once belonged to a giant parrot. They say the fossilized bones are from the biggest parrot that ever lived. It was probably as tall as a three-year-old child and weighed around eight kilograms. The researchers found the fossils in New Zealand. They have called the new parrot Hercules, after a strongman of ancient Greek mythology. The scientists studied the fossilized leg bones they found and said Hercules was around a metre tall. This means Hercules is twice the size of all other known parrots. The largest parrot scientists know of is the kakapo, a flightless bird that also lives in New Zealand. The kakapo is on the critically endangered species list. 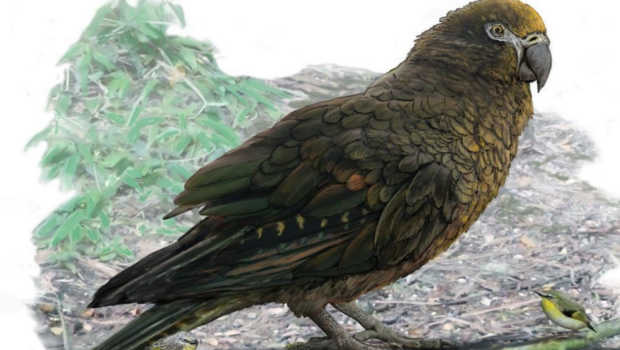 New Zealand is famous for its flightless birds. The kiwi is a symbol of the country. Scientists say these are vulnerable. This means they could become endangered if their environment stays the same. Another famous New Zealand bird is the 3.6-metre-tall moa. These flightless birds were the biggest birds that ever lived. They were overhunted to extinction early in the 15th century. Hercules lived about 19 million years ago. A researcher said it probably ate nuts, fruit and seeds, and "perhaps even other parrots". A researcher said: "New Zealand is well known for its giant birds. Until now, no one has ever found an extinct giant parrot, anywhere. There are many more unexpected species yet to be discovered."