JUDY WOODRUFF: Here to break down what those new numbers from Iowa mean for the 2020 Democratic presidential candidates, I'm joined by longtime Iowa pollster Ann Selzer, whose group, Selzer & Company, conducted the poll. Ann Selzer, welcome back to the NewsHour. So let's look again at those numbers, the main storyline, Elizabeth Warren at 22 percent, Joe Biden at 20 percent, Bernie Sanders at 11, everybody else in single digits. How much of a change is this from your last poll, and who is supporting Elizabeth Warren?
J. ANN SELZER, Selzer & Company, Inc.: Well, it's a nice jump for Elizabeth Warren. If you're up with of her supporters, you would see it that way. What she has done is really begun to build a coalition, and that includes women and college-educated likely caucus-goers. And for the first time, she is now leading with the under-35 age group. That's an encroachment into territory that was held by Bernie Sanders almost exclusively. So, she's eating into the support that he used to have there.
JUDY WOODRUFF: And you looked at enthusiasm as well. You had a category, are you extremely enthusiastic about a candidate, very enthusiastic? What did you see there?
J. ANN SELZER: Well, you see two things. First of all, we have got Warren and Biden at the top of the leaderboard, and the advantage goes to Elizabeth Warren, with slightly more saying they are extremely enthusiastic about that by 10 points, 32 percent vs. 22 percent for Joe Biden. But, really, if you look at the other two contenders -- and that would be Bernie Sanders and Pete Buttigieg -- it's almost half of their supporters who say they feel extremely enthusiastic. So it gives you a sense that there's other -- there are other coalitions building that could pop another candidate forward.
JUDY WOODRUFF: You also looked at what – I think you're calling it the footprint, who was a voter's first and second choice. What did you see? 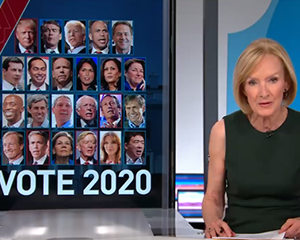 J. ANN SELZER: Well, it's first and second choice, and then, are you actively considering them? And there, also, Elizabeth Warren jumped about 10 points. She now has 71 percent of likely Democratic caucus-goers saying they're actively considering her or placed her first or second on their list. Joe Biden didn't move, stayed about where he was. You have three other candidates who crossed the 50 percent mark. And that's Bernie Sanders, that's Pete Buttigieg, and then rounding out that team is Kamala Harris. So I look at the rest of those with some upside potential. They have get enough people who are interested in them to make potentially a forward move. And we saw Elizabeth Warren poised in our last poll to do exactly that.
JUDY WOODRUFF: And that's -- and I do want to ask you about that, Ann Selzer, because some folks would look at this and say, well, this is really not good news for the people who are polling in single digits. But I hear you saying there's still movement. I mean, what are we looking at? A large percentage of Iowa voters are telling you they are -- Democrats, Democratic voters, are saying they're not -- you know, they may change their mind about who they're going to vote for.
J. ANN SELZER: Well, that's exactly right. And there are two numbers I would point you to. First of all, the top three that are in single digits, that's 53 percent of the vote, so there's a lot of vote left to be had. And, secondly, we asked, if you had a first choice, is your mind made up? And that accounts for 20 percent of all the likely voters who say, I have a first choice and my mind is made up. So they either don't have a first choice or they're open to considering other possibilities. And anybody who knows Iowa would know that sounds just like Iowa in caucus season.
JUDY WOODRUFF: Well, we are still several months away. And, Ann Selzer, I know you're going to keep on polling. Thank you very much.
J. ANN SELZER: My pleasure, Judy.