In the day's other news : President Trump took on globalism and Iran in his formal address at the United Nations today. He spoke against the backdrop of this growing impeachment talk in Washington. Again, Yamiche Alcindor reports.
YAMICHE ALCINDOR: The president's tone may have been subdued.
DONALD TRUMP, President of the United States: If you want freedom, take pride in your country.
YAMICHE ALCINDOR: But his talk was still tough, as he pushed his America-first approach.
DONALD TRUMP: The future doesn't belong to globalists. The future belongs to patriots.
YAMICHE ALCINDOR: In his address to the United Nations General Assembly, President Trump targeted familiar foes. In particular, he called for allies to help counter Iran.
DONALD TRUMP: All nations have a duty to act. No responsible governments should subsidize Iran's bloodlust.
YAMICHE ALCINDOR: And he called out Chinese trade policy. 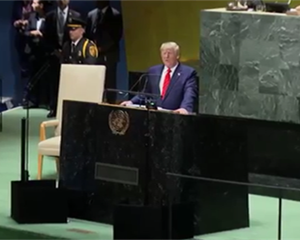 DONALD TRUMP: It has embraced an economic model dependent on massive market barriers, heavy state subsidies, currency manipulation, product dumping, forced technology transfers, and the theft of intellectual property, and also trade secrets on a grand scale.
YAMICHE ALCINDOR: The president also used the world forum to make his case for his domestic agenda. He praised U.S. employment rates and highlighted his tax cuts. and he was uncompromising on illegal immigration.
DONALD TRUMP: If you make it here, you will not be allowed in. You will be promptly returned home. You will not be released into our country.
YAMICHE ALCINDOR: Today's speeches also featured a number of authoritarian and far-right figures, including leaders from Turkey, Egypt and Brazil. Brazilian President Jair Bolsonaro dismissed warnings about wildfires in the Amazon rain forest.
JAIR BOLSONARO, Brazilian President (through translator): The Amazon is not being devastated, nor is it being consumed by fire, as the media misleadingly says.
YAMICHE ALCINDOR: Meanwhile, President Trump did meet with one traditional ally, British Prime Minister Boris Johnson. The meeting came hours after Britain's highest court struck down Johnson's decision to suspend Parliament. The president offered him moral support.
DONALD TRUMP: He's doing a fantastic job, not easy, and -- but doing a really great job. And I think he's going to make great progress come October.
YAMICHE ALCINDOR: For the PBS NewsHour; I'm Yamiche Alcindor at the United Nations in New York.