JUDY WOODRUFF: And our White House correspondent, Yamiche Alcindor, has been following this day's events. Yamiche, thank you so much. A few minutes ago, as you know, I was talking with Kellyanne Conway. It's clear that she, the president are pretty defiant in the face of all this publicly. How are they processing it internally?
YAMICHE ALCINDOR: While the president is being defiant and is saying that there was really nothing wrong when it came to the call between him and the president of Ukraine, privately, he is lashing out. And he's saying he wants to know the identity of this whistle-blower. Now, tonight, The New York Times is reporting that the whistle-blower is a man. He was a CIA officer, was detailed to this White House to work here for some time. They also say that that person is now working back at the CIA. There's little else that is known about the person. But when it comes to what -- how the White House is really processing all this, the White House is trying to, one, counterprogram. Today, there was the director of immigration and custom enforcement who was doing a briefing here at the White House talking about sanctuary cities, so-called sanctuary cities, at the very moment that the director of national intelligence was saying that the greatest threat, the greatest challenge that the U.S. faces is election interference. And the director of ICE was talking about immigration and illegal immigration. It's also important to know that the White House is still formulating its plan on how to push back on this impeachment inquiry. I'm told that the White House doesn't really have a plan at this time. I did talk to a Trump campaign source who said that they think that their researchers and rapid-response team that was supposed to be dealing with the reelection bid is capable of messaging during the impeachment. But there are a lot of people who think that that's just not going to be enough. 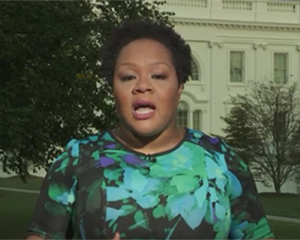 JUDY WOODRUFF: And I want to ask you about the impeachment issue, Yamiche. We know from Lisa Desjardins's report from the Hill about what Congress is doing. But you're also -- you have also been looking at public opinion polls. What are you seeing from the American people about this whole impeachment process?
YAMICHE ALCINDOR: We conducted a poll yesterday. And people are really split on whether or not the House should be focusing on this impeachment inquiry. I want to walk through some numbers for you; 49 percent said they approve of the House starting an impeachment inquiry. They say that that's a 10 -- now, we believe that that's a 10 percent -- 10-point jump from something from the past, because we asked a similar question in April after the Mueller report was released. We also found that 46 percent of people say they disapprove of the House focusing on this impeachment inquiry. I also want to say that our poll found that voters think that the impeachment inquiry won't impact who they vote for president. We found that when we asked that, will impeachment inquiry influence your vote, 25 percent said that was going to be a major factor, 14 percent said it was going to be a minor factor, and 58 percent said that wasn't going to be a major factor at all -- it wasn't going to be a factor at all. So, that's pretty striking, given all that's happening.
JUDY WOODRUFF: Yamiche Alcindor, a lot to follow today from the White House, as usual. Thank you, Yamiche.
YAMICHE ALCINDOR: Thanks.