LISA DESJARDINS: At the Capitol, the impeachment battle, for now, is on paper, but no less intense, as, today, committees released transcripts of two key witnesses. They are Gordon Sondland, the U.S. ambassador to the European Union, and Kurt Volker, former special envoy to Ukraine. Both were on the key call between Mr. Trump and the Ukrainian president in July. In the 739 pages released today, among the headlines, Sondland revised a critical piece of testimony about whether the U.S. tied nearly $400 million in aid money to specific demands from Ukraine. Yesterday, Sondland filed this, saying he now remembers telling a top Ukrainian official that "Resumption of U.S. aid would likely not occur until Ukraine provided the corruption statement that the U.S. wanted", saying Ukraine would investigate the 2016 election and the energy company which hired the son of former Vice President Joe Biden. A second headline, Sondland added more to his insistence that the president himself firmly didn't want a quid pro quo. And one more key point, the continued influence of President Trump's attorney Rudy Giuliani. His name appears more than 150 times in Sondland's testimony. Sondland was nominated by Mr. Trump to be ambassador to the E.U. in 2017. He's previously owned a boutique hotel chain on the West Coast and he's a longtime GOP donor who had given $1 million to Mr. Trump's inaugural fund. While Ukraine is not in the European Union, Sondland has said the president tapped him to work on the issue. He says there were "three amigos" working on that policy, himself, Energy Secretary Rick Perry, and Volker, whose career path sharply contrasts with the other two. Volker is a three-decade diplomat who has served under Democratic and Republican presidents. President George W. Bush named him to be U.S. representative to NATO. And, in 2017, President Trump named him to be the special envoy helping lead Ukraine policy. He resigned in September. Today's transcripts show Volker arguing against a Biden investigation and trying to win over a president who deeply distrusted Ukraine. Former Ukrainian lawmaker Serhii Lushenko, who worked with Volker for years, said he sees a diplomat trying to straddle sharp politics and good policy. 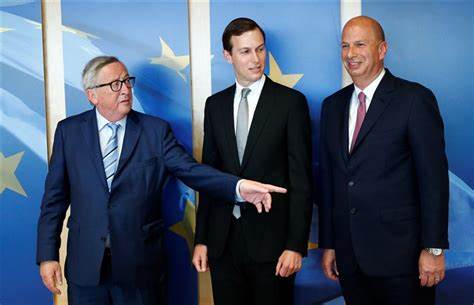 SERHII LUSHENKO, Former Ukrainian Lawmaker: We see that Kurt Volker was trying to maneuver to be effective as the special envoy, at the same time to be accepted by White House. And my understanding, he decided to give what Mr. Trump was looking for.

LISA DESJARDINS: Overall, Democrats say the transcripts only bolster their case that Mr. Trump withheld military aid and other support for Ukraine to pressure President Zelensky into opening investigations that could benefit him politically. But Republicans insist that Democrats have selectively leaked and withheld information in order to malign the president.

REP. MARK MEADOWS (R-NC): What all of us want is a fair process.

LISA DESJARDINS: And the process continues. Today, acting White House Chief of Staff Mick Mulvaney got a request from the investigating committees for testimony later this week. Thus far, Cabinet officials have declined these kinds of requests, as did two other Trump officials whose interviews were scheduled for today. As the House remains in first stages, the Republican leader of the Senate today stressed the possible end, that any impeachment charges would come there for trial.

SEN. MITCH MCCONNELL (R-KY): I will say I'm pretty sure how it is likely toned. If it were today, I don't think there's any question it wouldn't lead to a removal.

LISA DESJARDINS: One thing McConnell doesn't know, how long any trial would last.