This is Scientific American's 60-second Science, I'm Bob Hirshon.
Most animals are pretty g﻿﻿ood at avoiding the embarrassing faux pas of having sex with the wrong species. But what if you're a millipede under a cramped, dark, slippery rock with a dozen or more species all scurrying about, looking for love?
Fortunately, the critters evolved a solution: elaborate male gonopods—literally "genital feet"—with all manner of branches, bumps and bristles. And even with 12,000 species of millipedes, no two varieties of gonopods are exactly the same. So the little arthropods can immediately tell if they're consorting with the wrong species—convenient not only for the millipedes, but also for biologists.
"So you just have to pick it up and look at it and you say, yup, that's the species, and you can identify it."
That's millipede researcher Petra Sierwald at the Field Museum in Chicago. The only problem is—no offense to any male millipedes—the gonopods are tiny.
"If you look at a millipede, it's not that big to begin with. So you can imagine their modified legs... are even smaller."
Now, before we go any further, you might be wondering, "Who cares about millipedes, let alone their genitals?" And the answer is, not enough of us. Millipedes are believed to be the first land animals, lured out of the water by tasty dead vegetable matter on earth's primeval shores. 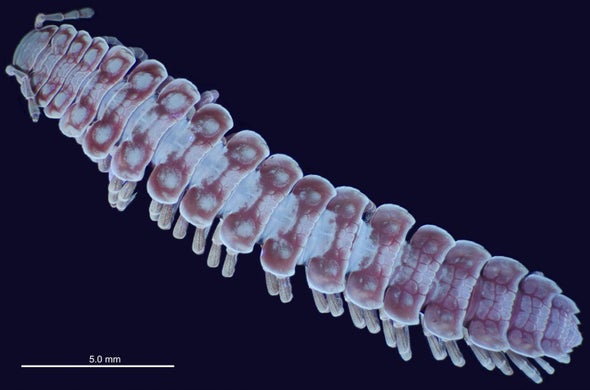 "They have been in the business of waste management for 460 million years. And that means they are eating rotting vegetation. That returns the nutrients to the soil. And the healthy soil is what we need to grow our food."
But today there aren't enough millipede researchers to determine if their populations are stable and healthy. In fact, Sierwald says there are thousands of unknown millipede species out there, just tapping their many, many, many, many feet, waiting to be noticed.
Which brings us back to gonopods. Recently Sierwald and her colleagues decided to shine ultraviolet light onto the millipede collection at the Field Museum, because that's just exactly the sort of thing people who work in museums do.
"We found... that their copulatory organs fluoresce."
And not just with one color, which would have been cool enough.
"Different parts of this copulatory organ will fluoresce in different colors: blue, greenish, bluish-greenish and yellow." The finding is in the Zoological Journal of the Linnean Society.
As to why the male sex organs fluoresce, Seirwald says no one—perhaps not even the millipedes themselves—know for sure. But the color-coded private parts do make identifying millipedes much easier for scientists. Sierwald and her colleagues are now working to photograph different species.
"We need pictures of the male gonopods, and we need them online, and we need them fast!"
So that scientists can help millipedes keep the soil healthful, for them and for us.
Thanks for listening for Scientific American — 60-Second Science. I'm Bob Hirshon.