This is Scientific American's 60-second Science, I'm Christopher Intagliata.
If you’re a germaphobe navigating the city, there are certain mandatory rules of engagement: Use a paper towel to shield your hand as you touch the bathroom door handle. Lift toilet seat covers with your shoe. Touch buttons at ATMs, and crosswalks, and elevators with a knuckle or the back of your hand—never a fingertip. I know this, because I am that person.
And a new study in the journal Scientific Reports somewhat justifies my behavior. Because when researchers in London sampled all those kinds of surfaces—in public shopping centers, train stations and common areas in hospitals—they found a whole lot of antibiotic-resistant bacteria lurking there. 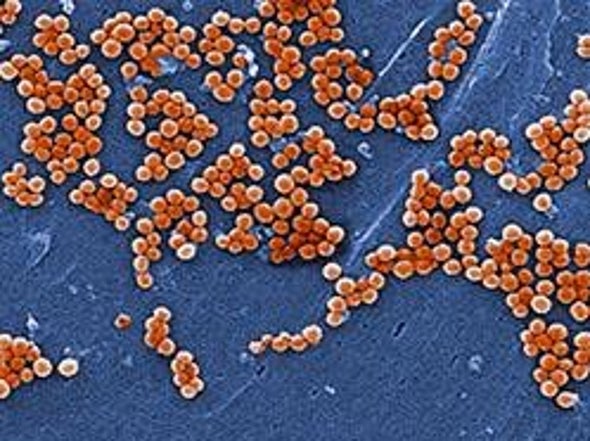 The scientists swabbed sites all over London and ended up with 600 samples of Staphylococcus bacteria. Of those, nearly half were resistant to two or more commonly used antibiotics, like penicillin and erythromycin. And the hospital samples had significantly more drug-resistant microbes—which makes sense, because hospitals are places where they use a lot of antibiotics.
But there’s a silver lining here, it might be how few staph bacteria were multidrug-resistant in public places: a mere 47 percent. Because a few years back, one of the same scientists swabbed London hotel rooms—and found that 86 percent of the staph bacteria there were multidrug resistant. Which may not help you sleep easy.
Thanks for listening for Scientific American — 60-Second Science. I'm Christopher Intagliata.