Activist investors are training their sights on tech firms 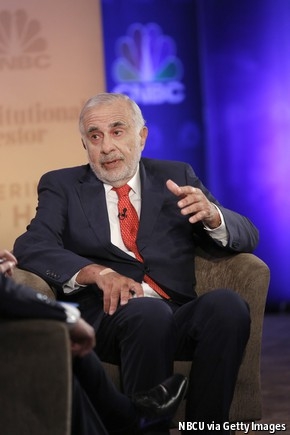 ALTHOUGH he is still stirring things up at Dell, an ailing computer-maker, Carl Icahn has found time to tilt at another tech titan. On August 13th the veteran shareholder activist revealed that he had built up a stake in Apple, though he stayed mum about exactly how many shares he had bought. Mr Icahn’s intentions, however, are crystal clear: he wants the consumer-electronics behemoth to expand plans to return some of its whopping $147 billion of cash and marketable securities to shareholders.

Mr Icahn is also after more money at Dell, where he has been lobbying with allies against a proposed buy-out plan put forward by Michael Dell, the firm’s founder, and Silver Lake, a private-equity firm. His pressing has already forced the buy-out group to raise its initial offer by over $350m, to $24.8 billion and he has taken his battle to the courts in a bid to extract an even higher price.

Other tech firms have been attracting the attention of activist investors too. Earlier this year ValueAct Capital, an investment fund, said it had built up a $2 billion stake in Microsoft. Jaguar Financial, a Canadian bank, has been encouraging fresh thinking at troubled BlackBerry, which announced on August 12th that it is exploring various strategic options, including alliances and a possible sale. And Elliott Management, a hedge fund, has been lobbying for change at NetApp, a data-storage firm that it thinks could do more to improve returns to shareholders.

One reason tech firms have found themselves in activists’ crosshairs is that, like Apple, some built up big cash piles during the economic downturn and have been slow to use the money. Financiers hope to get them to loosen their purse-strings faster and to pocket some of the cash. Mr Icahn wants Apple to increase and accelerate a share buy-back programme that is currently set to return $60 billion to shareholders by the end of 2015.

Another reason that tech firms make tempting targets for shareholder activists is that swift changes in technologies can trip up even the mightiest. Witness the case of Microsoft, which ruled the roost during the personal-computer era but has struggled to adapt to a world in which tablets and smartphones are all the rage. Investors hope to mint money by pushing companies to change more rapidly in response to such upheavals in their markets.

The rewards can be substantial. Egged on by Third Point, an activist hedge fund, Yahoo appointed Marissa Mayer as its new chief executive in July 2012. By the time she celebrated a year in the job last month, the troubled web giant’s share price had risen by over 70%. In July the hedge fund sold a big chunk of shares back to Yahoo. Mr Icahn thinks Apple’s share price, which closed at $499 on August 14th, could soar too if the firm follows his advice on buy-backs. He tweeted this week that he had had a “nice conversation” with Tim Cook, Apple’s boss, about his idea, though he did not say what Mr Cook thought of it. If Apple drags its feet, expect things to turn nasty.