In the evening, soon after Mr. Bennet withdrew to the library, she saw Mr. Darcy rise also and follow him, and her agitation on seeing it was extreme. She did not fear her father's opposition, but he was going to be made unhappy; and that it should be through her means -- that she, his favourite child, should be distressing him by her choice, should be filling him with fears and regrets in disposing of her -- was a wretched reflection, and she sat in misery till Mr. Darcy appeared again, when, looking at him, she was a little relieved by his smile. In a few minutes he approached the table where she was sitting with Kitty; and, while pretending to admire her work said in a whisper, "Go to your father, he wants you in the library." She was gone directly. 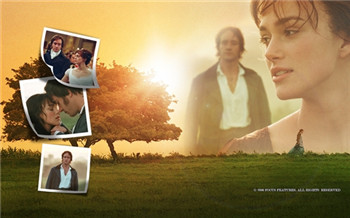 Her father was walking about the room, looking grave and anxious.

"Lizzy," said he, "what are you doing? Are you out of your senses, to be accepting this man? Have not you always hated him?"

How earnestly did she then wish that her former opinions had been more reasonable, her expressions more moderate! It would have spared her from explanations and professions which it was exceedingly awkward to give; but they were now necessary, and she assured him, with some confusion, of her attachment to Mr. Darcy.

"Or, in other words, you are determined to have him. He is rich, to be sure, and you may have more fine clothes and fine carriages than Jane. But will they make you happy?"

"Have you any other objection," said Elizabeth, "than your belief of my indifference?"

"None at all. We all know him to be a proud, unpleasant sort of man; but this would be nothing if you really liked him."