Listen to part of a lecture in an astronomy class.

OK. We've been looking at some of the smaller members of our solar system, comets.

You already know about the structure of comets.

Let's continue our discussion now by talking about orbits, especially those of the so-called periodic-orbit comets. 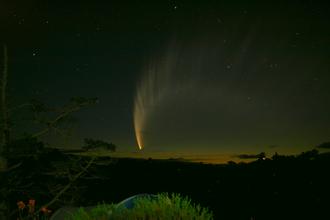 These are the comets that circle around the Sun pretty regularly.

They return again and again, predictably, after a certain period of time.

That's why we say their orbits are periodic.

Probably the most famous and brightest of these is Halley's comet.

Halley's comet comes from far out in the solar system, goes in close to the Sun, and then out again.

At its closest approach to the Sun, Halley's comet is about twice as close to the Sun as Earth is.

And at its farthest, it's about thirty-five time farther from the Sun than we are, which puts it out beyond Neptune.

Basically, the idea here is that a periodic comet, with its very elongated orbit, just keeps coming back around again and again.

With Halley's comet, well, it returns every 75 years, roughly.

But where is Halley's comet during most of this time?

Well, like all orbiting bodies, a comet moves faster when it's closer to the Sun, so it only spends about a year or two in our neighborhood, inside the orbit of Jupiter.

Most of its time is spent way out beyond Jupiter's orbit, poking along near the farther reaches of it own orbit.

Because of this, we can only see Halley's for a few months every 75 years, first on its way in toward the sun, and then on its way out again.

Now, you remember from our previous discussion that comet's nucleus, its core, is made up of ice and dust, like frozen snowball.

And as it approaches the sun, it starts to heat up.

And some of the ice vaporize into gas and spreads out from the nucleus.

The gases that vaporize from the comet, the comet never collects them back again, so on every orbit, the comet leaves part of itself behind.

OK, how old is this solar system? Four and a half billion years, remember?

And Halley's is going around the sun once every 75 years and losing stuff each time.