So now, well, we are looking at other… we are, we are trying to understand the biology of sauropods, comparing their fossils to the anatomy of modern animals to get a better idea of how they lived.

What we've found is that sauropods were experts at conserving energy.

They had enormous stomach capacity, the ability to digest food over a long period, converting it to energy at a slower pace, saving it for later. 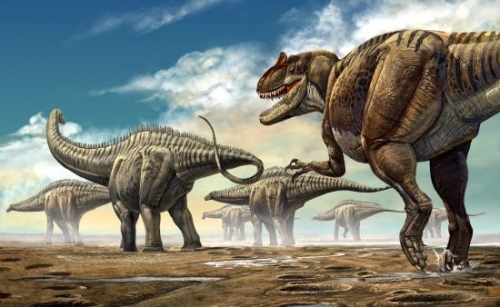 For animals with small stomachs, it takes lots of energy to constantly look for food and then digest it.

With larger stomachs and slower digestion, you don't need as much energy. Joseph?

Does… do scientists actually know about sauropods from looking at… I mean, how much can we actually learn looking at some ancient bones compared to all we can learn from modern animals?

And, comparisons between animals that lived millions of years apart?

But that's exactly what leads to discoveries, a hypothesis, a type of guess is made.

We test the hypothesis by looking for evidence to support it.

Then some questions are answered, which may lead to new questions.

For example, let's look at one of these comparisons.

Their skulls show they had no chewing muscles.

They need to swallow it whole.

But modern animals have an interesting aid for digesting food.

They swallow stones, stones that are used to help grind up the food before it's actually digested in the stomach.

These stones are called gastroliths.