Listen to part of a lecture in an animal behavior class.

As you know, researchers have long been interested in discovering exactly how intelligent animals are.

Today we are going to talk about a particular cognitive ability some animals seem to have—the ability to recognize themselves in a mirror.

Oh. I've heard about that. Chimpanzees have it.

Right. Chimpanzees and other primates, chimps, gorillas, orangutans, and of course, humans. 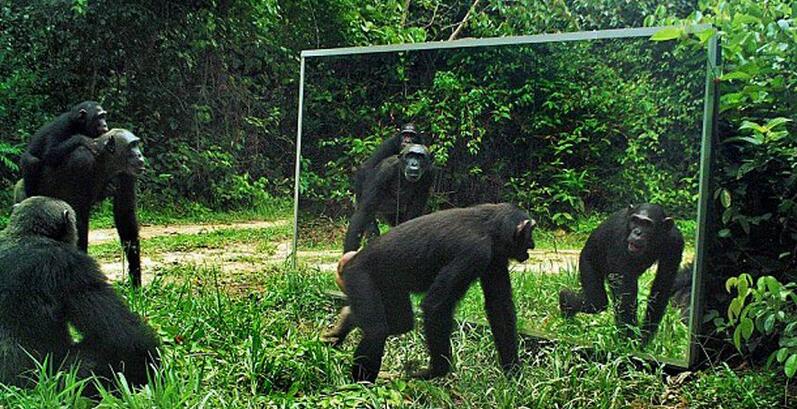 But it's also been found in elephants and bottlenose dolphins, a bit of a surprise.

It's very rare. Most animals don't have it.

And it's called mirror self-recognition, or MSR.

Well, how does it work? I mean, how do researchers know if elephants or chimps recognize themselves?

Researchers give them a mirror mark test.

In the mirror mark test, researchers put a mark on the animal where the animal is unable to see it or smell it or feel it, like on the side of their head, without looking in the mirror.

Now, typically, when animals first see themselves in the mirror, they think they are seeing another animal.

Often they will look for this animal behind the mirror.

They may even exhibit aggressive behavior.

But some animals, after this period of exploration, exhibit behaviors that show they know they are looking at themselves.

For instance, elephants will touch the mark on their heads with their trunks.

Now, it's been assumed that primates and some other mammals stood alone at the top of the hierarchy of cognitive evolution.

But recently, birds have been found to possess some of the same cognitive abilities!

In particular, researchers have discovered these abilities in corvids, birds of the Corvidae family.