Corvids include ravens, jays, crows and magpies among others.

And what kinds of cognitive abilities are we talking about?

Well, corvids and some mammals have the ability to plan for the future, to store food for instance, in places where they can find it later.

It's been suggested in fact that jays, corvids known for stealing each other's food, may hide their food precisely because they are projecting their own tendency to steal onto other jays. 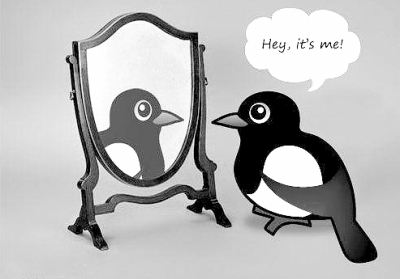 So let's talk about a study recently conducted with magpies.

As I said, magpies are corvids.

And because corvids have these other cognitive skills, researchers wanted to see if they were also capable of mirror self-recognition.

So they gave them the mirror mark test, placing yellow sticker on the birds' black throat feathers.

At first, the magpies all engage in the same social behaviors that other animals do—looking behind the mirror, etc.

But eventually, some of the birds, while looking in the mirror, kept scratching at the mark until they got rid of it.

And they didn't scratch at it when there was no mirror around. So they passed the test.

Wow! Do any other birds have this ability?

Well, not that we know of.

There was a study using pigeons, where researchers attempted to reduce MSR to a matter of conditioning, that is, they claimed that the ability to recognize oneself in a mirror could be learned.

So these researchers basically trained some pigeons to pass the mirror mark test.