Did they trade with those other civilizations?

Because if they did, wouldn't there've been some evidence of that?

You know, an artifact found in the ruins of other civilizations?

I mentioned jewelry, well, jewelry have been found in Mesopotamia and at archaeological sites in modern-day Pakistan.

But archaeologists didn't know where it came from.

Only after the site at Gonur-depe was excavated were archaeologists able to identify it as coming from Gonur-depe. Uh, Sheryl? 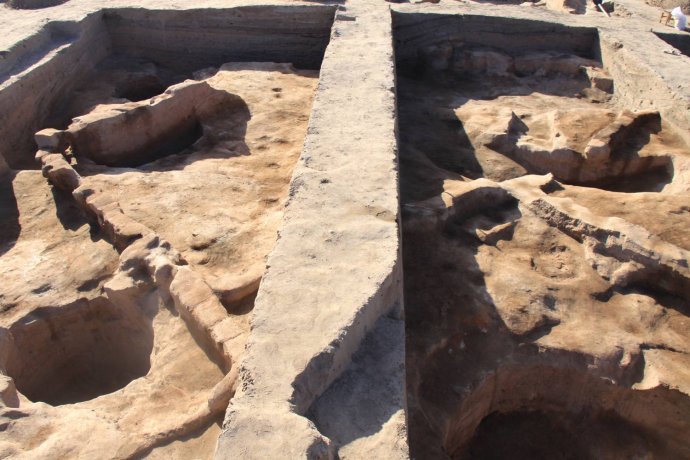 I wonder why nobody found this site before.

Well, before the discovery of this site, it was commonly believed that central Asia had always been occupied by mostly nomadic people.

So there would be no record of major settlements.

A couple of small finds have been made in the area, but really, no one had looked very hard.

Now, one mystery regarding this site is that archaeological records show it was inhabited for only a few centuries.

What happened to the people who lived there?

Well, the site was close to the Murgab river, which they would have depended on for their water.

And the Murgab river, which runs toward the west, is the kind of river that shifts its course over time.

So one theory is that the river's course shifted toward the South, and they simply followed it and built new towns to the South.

Another theory is that they were involved in wars with neighboring settlements.

One thing we do know is that in the decades since Gonur-depe was discovered, the site has deteriorated significantly.

I mean, it's been disturbed for the first time in millennia.

And being exposed to the Sun and wind has taken its toll on the ancient city.

So now the question is, do we partially restore and rebuild the site before the entire thing disintegrates?

It will take a lot of funding to restore it and I am not sure it'll be made available, which would be a pity.

Even a partly altered site can provide valuable information, which would be lost otherwise.