Listen to a conversation between a student and his art history professor.

How was the museum?

Great. I hadn't been there for a few years.

Did you enjoy the Van Gogh painting?

That's the thing. Looks like I have to change my topic.

Hmm... we are getting close to the deadline. 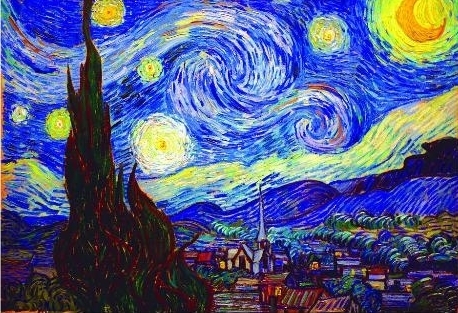 You were writing about the theme of night in the paintings of Vincent Van Gogh. It's a wonderful topic.

I know. People don't usually think of Van Gogh as an artist of nocturnal themes.

They think of brightness, sunshine, all that yellow and orange.

You are right, of course, about the intense light associated with his daytime paintings.

That's the paradox that I really like, the paradox of painting a nighttime scene using so much color and light.

So I was planning to focus mostly on his painting Starry Night.

When I went to the museum to look at the actual painting, like you told me to. It wasn't there.

Really? Isn't it part of the permanent collection?

Yes. But it's on loan right now to a museum in Europe.

Ah, I see. Well, I am strict about having students write about paintings they can observe first hand.

Well, I found another painting I could study instead.

I read that there are two paintings called Starry Night.

The first one was done by the French realist painter Millet.

It may have been the inspiration for Van Gogh's painting.

Millet's painting is located near my family's house in Connecticut.

And I am going there this weekend and could study it then.

I made sure it's not out on loan.

That definitely would work then.

We know that he really admired Millet's work.

And a lot of us think Van Gogh saw this particular painting by Millet in Paris in the late 1700s.

Yeah. Although Millet was a realist painter, and Van Gogh a post-impressionist, the two paintings still share lots of features, not just the name.

The most striking shared feature has got to be the amazing light effects.

I am excited to go see it. But one other thing ...

I was thinking about getting a head start on my next assignment while I am at the gallery in Connecticut, the assignment on miniatures.

They have a lot of miniature portraits of children as part of their permanent collection.

Yeah. So I figured I could also get started on that essay, study a few while I am there.

I'd focus on the meaning of the objects that some of the children are holding, some are holding flowers, one child has a rattle, another a toy violin…

That would be fine. Uh, those objects ...we call them attributes.

The attributes chosen to be included in a particular miniature was often meant to communicate parents' hopes and dreams for their child.

So I think you'll learn a lot about how people viewed children at the time the miniature paintings were done.